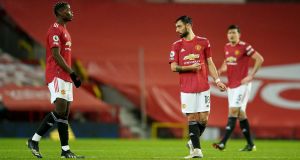 Manchester United are being held back by inconsistent performances from their top players, former defender Rio Ferdinand said after their 2-1 defeat by bottom side Sheffield United in the Premier League on Wednesday.

United, who would have temporarily replaced Manchester City (who still have a game in hand) at the top of the table with a win, have been on a good run in recent weeks and delivered an inspired performance to draw with Premier League champions Liverpool earlier this month. And then went one better to defeat their rivals in an FA Cup clash last weekend.

United last won the league in 2013 under Alex Ferguson and have failed to put up a serious challenge since.

“It’s what we said about Manchester United for many, many months that the inconsistencies of individuals on this team is what’s holding them back. Bruno Fernandes, who they’ve relied on so heavily in recent weeks, months, didn’t get it going today. Paul Pogba the same . . . Marcus Rashford and Anthony Martial were invisible.

“If anybody was starting to get carried away at Old Trafford... it was a reality check.”

United boss Ole Gunnar Solskjaer was critical of his team following the defeat: “Well, of course we’re disappointed. Any result in the Premier League this season shouldn’t surprise anyone. But then again, very disappointed we couldn’t put a better performance on.

“It was down to us to put a performance up and we just couldn’t find an opening behind or round or between a very compact and good Sheffield United defence.

“The big moments went against us. If you look at it, Billy Sharp’s been around the place and he knows how to put a goalkeeper off and that’s a definite foul on him (before Bryan’s opener), so David (De Gea) can’t get up.

“For me, the referee makes a mistake by blowing the whistle (for a foul by Maguire) on our goal (from Anthony Martial in the first half) but that happens.”

Solskjaer was annoyed by the poor defending in the build-up to Sheffield United’s winner and knows his side need to get their mojo back quickly.

“That little spark, that edge, we didn’t have that extra creativity, imagination, the X factor we’ve had,” the Norwegian said.

“It’s happened, we look at it, agree it is not good enough and go again.”