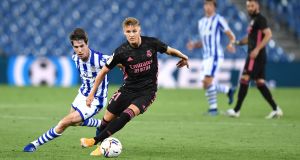 Martin Odegaard has joined Arsenal on loan until the end of the season. Photograph: Juan Manuel Serrano Arce/Getty

Real Madrid midfielder Martin Odegaard has joined Arsenal on loan for the remainder of the season.

Odegaard, 22, had found first-team opportunities hard to come by at the Bernabeu and was expected to depart during the current transfer window.

Having impressed on loan at Real Sociedad last season, it was initially anticipated that the Norway international would return for another stint.

But instead Arsenal made a move to take Odegaard to the Emirates Stadium.

“It’s great that we’ve secured Martin to come to us until the end of the season,” Arsenal boss Mikel Arteta said.

“Martin is of course a player that we all know very well and although still young, he has been playing at the top level for a while.

“Martin will provide us with quality offensive options and we’re all excited to be integrating him into our plans between now and May.”

The Gunners had highlighted the need to bring in a player who can occupy a number of attacking midfield roles and Odegaard follows Brighton goalkeeper Mat Ryan in joining the club until the end of the current campaign.

Odegaard will link up with fellow Real Madrid loanee Dani Ceballos in north London but Arsenal have no option to buy either player this summer.

While Odegaard is not injured, it would be a surprise to see him start against Manchester United in the Premier League on Saturday given his lack of first-team football at Madrid in recent weeks.