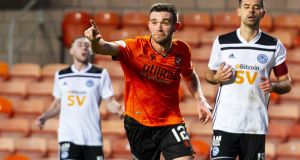 Sam Stanton celebrates after scoring a goal for Dundee United against Ayr in 2019. Photograph: Euan Cherry/SNS Group via Getty Images.

Dundalk have announced the signing of Scottish central midfielder Sam Stanton, a former under-21 international, who arrives after a short time last year at USL Championship side Phoenix Rising.

The 26-year-old who made his Hibernian debut during Pat Fenlon’s time in charge of the club, played more than 50 games there and, after a few loan spells in Scotland, as many again for Dundee United before heading to America.

His move to Ireland comes, he says, after a conversation with Dundalk coach Filippo Giovagnoli persuaded him that the club’s offer was “an opportunity I couldn’t really turn down”.

The club’s sporting director, Jim Magilton said the club was pleased to get him. “He will provide real competition and experience to an area of the pitch where we needed strengthening following recent departures and I know we are all really looking forward to working with him and developing his game even further.”