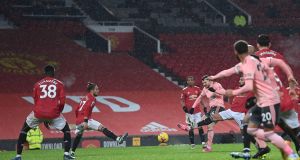 Manchester United were insipid, Sheffield United impressive in a display that doubled their win tally, the substitute Oliver Burke’s 74th-minute winner a fine finish that also summed up why the home side deserved to lose.

David De Gea failed to clear and instead handed John Lundstrum possession near goal. The visitors were allowed too much time and after Burke shot initially Lundstrom could find him again inside United’s area with zero pressure and the No 14 hit his first Premier League strike in off Axel Tuanzebe.

This followed United falling behind the first time via equally hapless defending from their achilles heel: the high ball from a set piece, Kean Bryan the beneficiary. And, while Harry Maguire managed to equalise and Edinson Cavani spurned a late chance, the Blades emerged with the victory.

Tuanzebe was given a first league start since October 2019 after Eric Bailly was injured in training, while Victor Lindelöf was stood down to the bench from Sunday’s FA Cup victory over Liverpool. Chris Wilder’s side arrived with a solitary win in the league, their five points rooting them to the bottom and last term’s corresponding fixture was a 3-0 defeat in which Anthony Martial notched a hat-trick.

The Frenchman was the unwitting actor in the opening incident and was left clutching his shoulder after a robust challenge from Phil Jagielka. The No 9 was able to resume and was part of a flowing move that scattered the salmon-shirted visitors as Manchester United advanced from halfway, Paul Pogba the instigator. The midfielder began imperiously – one instant no-look chip releasing Bruno Fernandes behind the lines, only for the Portuguese’s unsure touch to stymie his run on Aaron Ramsdale’s goal.

Now Marcus Rashford began and ended a slick sequence. The No 10 cut infield and fed Mason Greenwood, who instantly relayed the ball to Aaron Wan-Bissaka. The right-back’s cross went over the D and there was the No 10 to steer marginally wide of Ramsdale’s right post.

These were bright moments and signified how dominant the home side were. Yet there was alarm when the visitors came close to sucker-punching them via a John Fleck pass that sundered the defence and gave Billy Sharp a clear shot which De Gea’s legs repelled, but only just

Manchester United’s riposte had Fernandes lobbing into Greenwood whose right-to-left run had Sheffield United’s rearguard flailing. The No 11 skipped round Ramsdale but took an extra touch and the keeper could smother the ball. Now came calamity for the home side.

Solskjær’s team have a vulnerability at dead balls and Fleck exposed this. The midfielder’s corner from the right was placed into the sweet spot in front of De Gea. Both the Spaniard and Tuanzebe leaped yet neither could prevent Bryan heading in off the post. It was the 24 -year-old’s first goal for the Blades, and the eighth league strike United have conceded from a set piece this season.

This left Solskjær stony-faced and his disquiet nearly deepened when the slumbering Tuanzebe allowed David McGoldrick to slip in before Wan-Bissaka did enough to end the danger. Moments later Martial rolled the ball in but Maguire was adjudged by Peter Banks to have fouled Ramsdale and VAR backed the referee up. United pressed until the interval but this was as close as they came to the equaliser meaning that Solskjær’s chat before the second half had become vital.

He and Wilder made no changes at half-time and what unfolded was the same pattern of the home side hogging the ball. Greenwood had a golden chance to equalise when Fernandes threaded him in but he fired across Ramsdale and wide. This signalled a need for patience from the home side, the trick being to stay composed and the opportunities would surely arrive.

Instead, Alex Telles wasted a corner and there was frustration when Nemanja Matic fouled needlessly, then Fernandes hit a simple pass straight out. Here was the ideal scenario for the visitors: a spoiling job with their noses in front while continuing to threaten sporadically as when McGoldrick unloaded too high at De Gea.

After the latter was again a statue at a high corner, Manchester United moved upfield and claimed a free-kick. Rashford took a potshot from distance that Ramsdale gathered with ease.

Yet far better was what came next. Telles swung in a corner from the left and a free-running Maguire headed expertly past Ramsdale. The captain’s celebration was muted – perhaps due to being a former Blades player – and Solskjær reacted by swapping Greenwood for Cavani. – Guardian