Meanwhile, Eunan O’Kane has also made a loan switch, leaving Leeds for Luton 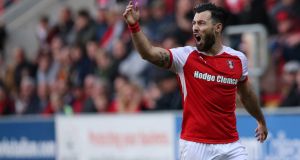 Irish midfielders Richie Towell and Eunan O’Kane have both made deadline day loan moves with the former Dundalk player rejoining Rotherham United and the northerner heading to Luton until the end of the season.

“I’m delighted to be back,” said Towell after his return to the club he helped win promotion via the League One play-offs last season. “It’s taken a little bit longer to get sorted than I would have wanted but it’s done now, I’m back at Rotherham and I’m really excited now to get started.

“We were very successful last year and hopefully we can build on that,” continued the 28-year-old who signed for Brighton in 2015 after a couple of hugely impressive League of Ireland campaigns but never managed to establish himself in Chris Hughton’s side.

“I know the gaffer has made some really good signings so there’s a lot of competition for places but I’m looking forward to coming here, knuckling down and working hard to get back in the team

“I think everyone knows that the gaffer likes his players to work hard and I think that everyone saw with me last year; I’m a team player, I work hard for the team although it’s probably something that I’m going to have to step up this year because it’s going to be tough in the Championship.

“There was a bit of interest elsewhere but going into a new team, new surroundings; that just wasn’t what I wanted. I want to hit the ground running and so to come back to a club that I know inside out and that I’m very at home at, hopefully that makes it a little bit easier.

“I think the lads have had a decent start to the season (last weekend’s defeat of Millwall left them six points from their opening five games), I’ve been keeping tabs on every game, every minute. So I know the lads have been doing well, I know the lads in the middle of the park have been doing well as well. But I never want to take the easy road, they know I’m a hard worker, I’m willing to put that in and hopefully I can get in the team as soon as possible.”

Towell, who joins an Irish contingent at the club that includes Ryan Manning, who is on loan from QPR, as well as Darren Potter and Anthony Forde, could feature in Saturday’s game against Wigan Athletic. “It would be one training session and straight into a game,” he says, “but I did that last season and it was no problem to me; hopefully the gaffer gives me the nod this time too so I can play a part in it.”

O’Kane, meanwhile, has had to drop to League One in the hope of securing regular football after finding himself on the margins at Leeds since the arrival of Marcelo Bielsa as first team coach.

Prior to that he had done well for the club and a number of clubs are believed to have been interested in taking him before he opted for Luton.

“We had a number of options and Eunan was by far the best available, we felt, for how we play and what we do. Once we spoke to him and persuaded him that this was the right club for him, we were delighted to have him.”

Former Republic of Ireland Under-16 international Tom Field has also made a switch with the 21-year-old left sided defender leaving Brentford for Cheltenham.