Limerick in firing line as Dundalk seek to restore momentum 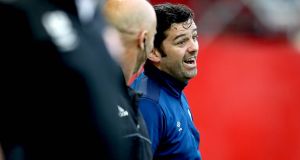 Tommy Barrett: the Limerick boss has no choice but to rely on a young side against Dundalk at Markets Field. Photograph: Ryan Byrne/Inpho

Having suffered a defeat to Shamrock Rovers that certainly makes the race for third place a good deal more interesting, Dundalk look to get back to winning ways this evening at Limerick where the home side doing Cork City any favours would be a bigger surprise that Tuesday’s result in Oriel Park.

The recent financial problems at the club mean that Tommy Barrett heads into the game with a squad of 18 , ten of whom, he says, are 21 or younger with seven still eligible for the under-19s.

It does not sound like a recipe for success against an almost full-strength side that has won this season’s previous three encounters by a combined 15 goals to nil. Sean Hoare is serving a suspension for the visitors while Shane Duggan is back from one for the hosts but Eoin Wearen joins Darren Dennehy on the injured list.

City, in the circumstances, can only focus on winning their own game after a recent draw against St Patrick’s Athletic that now looks more of a blow than ever and John Caulfield is keenly aware that Sligo Rovers have the capacity to put another dent in his side’s title hopes if they are not a little more clinical than they were against the Saints.

“If we are not at our best,” he says bluntly, “we will drop points.”

His opposite number, Gerard Lyttle, talks at one point about his side not being completely safe yet but in reality the pressure is off due to Limerick’s problems.

“The pressure is on Cork in this fixture to an extent given the boost they have had this week,” he says, “and we’re really looking to go down there and put in a performance and get the result.”

They are free, as Caulfield puts it, to have “a cut off” the champions. The visitors travel with the suspended Séamus Sharkey or long-term injury absentee Gary Boylan while their hosts have Conor McCarthy and Colm Horgan as well as doubts about Steven Beattie.

After having taken some delight in ending Shamrock Rovers’ recent unbeaten run in the league, Bohemians head to the Brandywell in the hope of ending a slightly bizarre losing streak with the Gypsies beaten in their last 10 straight encounters with Derry City.

Robbie McCourt comes into the squad after joining this week from West Brom where he was for three years but Keith Long suggests that the left sided defender, who he apparently sees playing a holding midfield role in his side, is likely to be given a little time to adapt to his new surroundings before actually starting a game.