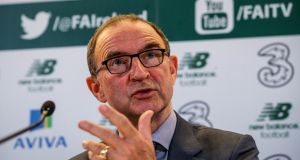 Martin O’Neill: “If England, your country of birth, do put something to you, then I think that it makes you think for a little while.” Photograph: Ryan Byrne/Inpho

Martin O’Neill believes Declan Rice should be able to resolve any doubts about his senior international career by the time the qualifying competition proper for the European Championships gets under way in March, with the Republic of Ireland manager suggesting that would give the 19-year-old “plenty of time”.

Having played, and generally impressed, in three senior friendlies for Ireland this year, Rice declined a call-up for the Nations League game in Wales next month on the basis that it would rule out any subsequent international switch. O’Neill said he was aware that the player had been approached by England regarding his future and while he does not know what exactly was said to the player, he understood Rice’s reluctance to completely commit himself at the moment.

“If England, your country of birth, do put something to you, even if it’s only to tell you to put something on hold, then I think that it makes you think for a little while,” said O’Neill, who is still hopeful that the player will eventually opt to continue playing for Ireland.

The former Aston Villa and Sunderland boss said he would maintain regular contact in an effort to persuade the teenager to grab the opportunity that Ireland presents at this early stage of his career rather than waiting and hoping something will happen with England somewhere further down the line.

“He has a number of things to weigh up, of course, and one of them, in terms of playing for a country, is your chances to play. He has already played for us and I think we would all say around here that he will play far more often for us than he might do for England ... certainly in the earlier stages of his career.”

There is the occasional reference to Jack Grealish, who has not yet come close to a senior England cap, but recognition too that the Aston Villa midfielder, who attracted interest from Tottenham over the summer, is progressing and might well get to play at that level in the future.

There is also an acknowledgement of the influence of the players’ fathers in each instance and the part that Rice’s may yet play in nudging his son towards Ireland.

“His dad followed him everywhere. He was out in Turkey. I’ve been in his father’s house and he has got the shirts there, so I know where the dad’s allegiance lies anyway, even though the dad was actually born in England.

“When Jack Grealish was going on, I said that this was very much a family decision. Now I thought that Jack’s father was very strongly pro-England at the time even though he loved the under-21 games that Jack played here. But the father here was very strongly with us in that sense.

“Still, it’s their decision at the end of the day, I must keep emphasising that, and if England have gone and promised him something in the not-too-distant future, that he will play for them at senior level, maybe that’s something he has to take into consideration. I am still hopeful but I have never called it until it’s over the line because of experience.”

Ultimately, O’Neill made a joke of the urgency he attaches to the situation when asked if he would give the player a little time and space to weigh up his options. “I’ll give him 20 minutes,” he said drily. “I’ll be living with him.”

There was less humour involved a little while later when the manager observed that: “It would be nice if I was actually capping someone who was born in Kerry or Limerick or Dublin.” That, though, is an issue unlikely to be resolved by the time March comes around.

1 Monica Seles: The warrior queen who could have been the best ever
2 GAA will take action against intercounty teams returning to training early
3 Séamus Power rockets into share of clubhouse lead in Detroit
4 Leicester seek to flatten their dismal curve and end season on a high
5 The Best Of Times: Harrington stares down Garcia in epic Claret Jug battle at Carnoustie
Real news has value SUBSCRIBE
Crossword Get access to over 6,000 interactive crosswords