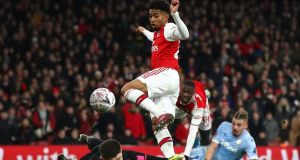 For 45 minutes Mikel Arteta watched a team playing with the kind of style and intensity that, if he has his way, will grace this stadium every other week. He will be dissatisfied that it was Leeds, not Arsenal, who had performed so dazzlingly to that point but by the end it felt like another important hurdle cleared in the life of a rookie manager.

Whatever Arteta said at the break paid dividends, Reiss Nelson’s winner capping a vastly improved performance and his decision to field a strong line-up in a bid to retain the feelgood factor of his early tenure was ultimately vindicated.

Arteta had spoken at length before the match about how success in the FA Cup can fuel an addiction to winning and help unite a club that has felt hopelessly factionalised. He has already made strides in addressing the latter point and is, quite clearly, far too cute an operator to lay himself open to early charges of disrespecting a competition he won as Arsenal’s captain.

So it was no surprise to see an experienced selection, with Pierre-Emerick Aubameyang, Lucas Torreira, Ainsley Maitland-Niles and Bernd Leno the only fit first-teamers not deployed.

It was more noteworthy that, in this instance, the Premier League side was the less-rotated. Marcelo Bielsa made five changes to his Championship leaders; among them was the insertion of the midfielder Robbie Gotts, who was a deserving cause for his patience if nothing else. Before this call-up, Gotts had been an unused substitute 35 times without entering the pitch.

None of that stopped Leeds from roaring out at the tempo Bielsa prefers, moving the ball slickly through midfield and creating their first chance of many in the seventh minute when Mateusz Klich advanced before feeding Patrick Bamford. The centre forward was well placed on the left of the box but delayed slightly in setting himself and was scuppered by a dramatic sliding block from Rob Holding.

It was Holding’s return from a two-month injury absence that necessitated Sokratis Papastathopoulos’s surprising shift to right back. Accordingly, Leeds continued to pull Arsenal’s repurposed defence around. Jack Harrison’s firm left-footer was parried uncomfortably by Emi Martínez and then Bamford, working space to shoot after an intricate move, clipped the top of the bar. Only a quarter of an hour had passed and Arteta’s side were being run ragged.

Their cause was hardly helped by the fact that their attempts to build from the back resembled a tribute act to the latter days of Unai Emery. Leeds were able to attack in waves, safe in the knowledge that the next chance to do so would arise soon enough. Martínez spilled a deflected Kalvin Phillips free-kick, the loose ball hurriedly being cleared, shortly before Ezgjan Alioski fizzed an angled effort inches wide following a breakneck counterattack.

The flow eased briefly before, in the 34th minute, Papastathopoulos inadvertently drew a stunning one-handed save from Martínez as Alioski looked to head home at the far post.

Yet another knife-through-butter incursion saw Bamford and Harrison both fail to convert. Gotts spooned over a glorious opportunity to adorn his debut five minutes before the break and by the time that came around Arsenal, whose only moments of moderate threat had been an early Nicolas Pépé shot and a wayward David Luiz header, were thanking their lucky stars.

Had Arsenal dipped markedly beneath the parameters for effort and application set by Arteta or had they simply come across a crack team that has had 18 months, rather than 17 days, to fine-tune? Either way they re-emerged unrecognisably, Nelson instantly running beyond the Leeds defence before being crowded out.

The second-half’s opening minutes felt like a mirror image of the first. Lacazette’s side-footer was repelled by the Leeds goalkeeper Illan Meslier, another debutant, before Matteo Guendouzi shot a whisker wide. Bamford quickly worked Martínez again at the other end, but then Arsenal managed to do what Leeds had not.

It was a scruffy goal and Nelson was fortunate to receive the chance when Gaetano Berardi, stretching to intercept Lacazette’s centre after some fine approach play by Pépé, could only knock the ball into his path. The finish, bundled home off Meslier from in front of the posts, was ungainly but accurately reflected the transformation.

Bielsa made two quick substitutions but as proceedings entered their final quarter Arsenal looked increasingly secure. They have flagged in recent second-halves but kept pushing and Gabriel Martinelli, who had replaced Nelson, would have scored had Meslier not saved low down.

A restoration of parity never looked likely and a tangle between Papastathopoulos and Harrison reflected Arsenal’s determination to keep what they had.

A trip to Bournemouth, the scene of Arteta’s first game in charge, awaits.