‘Irreplaceable’ Kane not expected to return until at least March 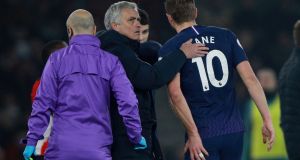 Harry Kane is not expected to return to action until at least March as scans on his injured hamstring have revealed a serious tear.

The Tottenham striker limped off during his team’s 1-0 New Year’s Day defeat at Southampton, and manager José Mourinho made it clear at Friday lunchtime that he had started to plan for a number of weeks without him.

The club are wary of putting a public timeframe on Kane’s absence, partly because they know that he is a quick healer, who has usually returned ahead of schedule from previous injuries. There are also further checks that need to be made. Yet the bottom line is that the prognosis from the scans and tests so far is grim.

Spurs have six Premier League matches between now and the start of March, including home games against Liverpool and Manchester City, and a visit to Chelsea. They face RB Leipzig at home in the first leg of the Champions League last 16 on February 18th, with the return not until March 10th.

Kane said in a tweet: “Head up. Tough times don’t last, tough people do.” Spurs merely said that Kane had “suffered a tear in his left hamstring.”

Kane will captain England at Euro 2020 this summer, and such a serious setback in the countdown would have been the last thing he wanted.

Spurs have no specialist senior replacement for Kane, with winger Son Heung-min – who is available after serving a three-match ban for his red card against Chelsea – in the frame to fill in. Lucas Moura could offer an another alternative.

Mourinho also has 17-year-old Troy Parrott, but he said it was “too soon” to think about relying on the Republic of Ireland international.

Spurs play at Middlesbrough in the FA Cup on Sunday.

“If you ask me just my feeling – good news or bad news – I am more on bad news than good news, that’s my feeling,” Mourinho said. “What the player felt, Harry Kane leaving a match, the way he did it, he didn’t think twice, it didn’t take him two seconds to realise the severity of the situation.

“I’m not great on grades [of hamstring tears]. I’m great on experience and feelings. I think we’re going to lose him for some period, and because I am totally convinced of that I can anticipate that I don’t want to be here with you crying in every press conference now. Every minute of every game he doesn’t play we miss [him] but I don’t want to be crying all the time.”

Mourinho was asked a question about the depth of his squad, and whether there was sufficient cover in it. The long pause that prefaced his answer was revealing.

“We have what we have. That’s the squad that started preseason, that’s the squad we have for the season. Again, everybody knows the importance of Harry in the squad. I think irreplaceable. If you think about one player by one player, I think he’s irreplaceable. But we have to try solutions with the players we have. I come to work with the players that are available, and I’m not thinking about the market.

“The world doesn’t end at the end of this season. The end of the season is just the end of the first period. I watched Liverpool last night, and Jürgen [Klopp] arrived in October 2015 – eight transfer windows, lots of players leaving, lots of players coming and, even more important than that, time for him to put his philosophy, his training methods, his fingerprint. Beautiful results as a consequence of fantastic work, step by step, phase by phase.”

Mourinho said Spurs would look to loan out Jack Clarke this month. They signed him from Leeds last summer, before loaning him back to Elland Road, where he has barely featured over the first half of the season. The club announced on Boxing Day that they were to recall him. – Guardian