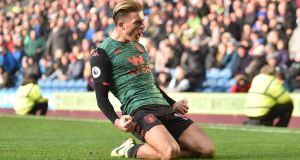 Aston Villa bounced back from their drubbing at Watford to record only their second away win of the season at Burnley, outclassing their opponents on the pitch and closing the gap to them in the league table. A late Burnley goal actually gave the final scoreline a flattering gloss, in the first half in particular Villa were full of running and attacking ideas, with Jack Grealish pulling most of the strings.

Villa enjoyed most of the possession in the first half, used it well and would have turned round even further in front but for the latest VAR outrage. Grealish was most certainly not offside when he skipped away from Phil Bardsley to meet Ezri Konsa’s 11th minute cross with a glancing header, but after the goal had been given and the ball placed on the centre spot ready to restart it became clear that Stockley Park scrutineers were checking whether Wesley’s heel was closer to goal than that of James Tarkowski.

Eventually they decided it was, though the fact the deliberations lasted more than two minutes gives a clue as to how tiny was the margin. The Villa fans at the other end of the ground vented their anti-VAR feelings in the now familiar way, as well they might. The way the technology is being used in this country is anti-goals and anti-excitement, and you don’t get up early on New Year’s Day and brave the M6 to put up with this sort of nonsense.

Not that Villa let the injustice bother them. They kept pressing forward, kept catching the Burnley defence square with the accuracy of their passing, and just before the half hour were rewarded with a splendid goal. Predictably Grealish was again involved, interpassing with Wesley on the edge of the area before his lofted return found the striker with room to shoot. Wesley took the ball on his chest before putting enough power in his right foot volley to beat Nick Pope in the Burnley goal.

The Turf Moor crowd were now starting to berate the home defence for allowing their opponents too much time and space on the ball, though the message went unheeded. On the stroke of half time Burnley stood back and watched as Villa moved the ball smartly from right to left across the edge of the area, until Douglas Luiz’s pass gave Grealish the opportunity to weigh up his shooting options.

Bardsley unwisely stood off the Villa captain as he first shaped to attempt a curler into the top right corner before summoning the accuracy to find the top left corner instead. Grealish has shown time and again this season what he can do in these situations and closing him down quickly is a defensive imperative.

Burnley sent on Jay Rodriguez for the second half and he nearly pulled a goal back almost immediately, shooting too high with little time to react to Tarkowski’s driven cross, though at the other end Villa might have extended their lead but for Pope keeping out an effort from Douglas Luiz.

Burnley put the Villa defence under sustained pressure in the second half without ever really looking like scoring until Wood popped up at the far post to nod in a cross from Ashley Westwood, the tall striker’s glaring miss from a good position a few minutes earlier being more typical of their afternoon.

Tom Heaton was injured in attempting to keep out the header so Villa had to see out a nervy last 10 minutes with a substitute goalkeeper. As Burnley did not manage to put Orjan Nyland to the test apart from obliging him to come out and collect a couple of crosses, the visitors held on for a victory that might have been even more comfortable had Jonathan Kodjia and Luiz not squandered excellent second half opportunities. – Guardian