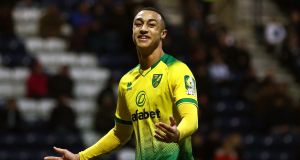 Teenager Adam Idah struck a hat-trick to fire Norwich into the fourth round of the FA Cup for the first time since 2013 as they brushed aside Preston 4-2 at Deepdale.

Idah, making only his second Norwich start days after his Premier League debut as a substitute against Crystal Palace, opened the scoring inside 90 seconds and made it 3-0 before half-time when he fired in a second from distance.

In between the 18-year-old played a key role in Onel Hernandez’s strike and he was not done there, sealing his hat-trick from the penalty spot in the 61st minute after Billy Bodin pulled one back for Preston.

Josh Harrop got a second for Preston with six minutes left, but Norwich had done enough to win their first third-round tie since winning 3-0 at Peterborough seven years ago.

The extent to which Daniel Farke was concerned about advancing was unclear given his team selection, but in a season of Premier League struggle, this result will offer hope that the club has a new goalscorer on the way through.

With his side rooted to the foot of the Premier League, seven points from safety and with a trip to Manchester United up next, Farke made eight changes from their 1-1 draw with Crystal Palace on New Year’s Day, with only Sam Byram, Christoph Zimmermann and Todd Cantwell retained.

But that was one less than Preston boss Alex Neil, who kept only Darnell Fisher and Ben Davies from their 2-0 defeat at Middlesbrough, preferring to focus on next weekend’s Championship derby against Blackburn and their play-off push.

That could have been a recipe for a pretty flat match but instead Idah provided the spark.

The Republic of Ireland Under-21 forward needed only 84 seconds to score his first Norwich goal. Marco Stiepermann’s pass sliced open the Preston defence and released Idah, and he slipped the ball beyond Connor Ripley and into the corner of the net.

Idah was involved again when Norwich doubled their lead just before the half-hour mark as he broke through the Preston defence again. This time Ripley blocked Idah’s shot but then failed to deal with Hernandez’s strike as he followed up.

And the game looked over before half-time as Idah struck his second — another moment Ripley will not want to see again.

The keeper, standing in for regular stopper Declan Rudd, came darting off his line to beat Hernandez to the throughball, but succeeded only in playing it to Idah who lofted a shot into the net from distance.

Preston started the second half much stronger. Bodin’s left-foot shot was straight at Michael McGovern but the power caught out the Northern Ireland goalkeeper who could only parry it, and Bodin scored from the resulting corner, nodding in from close-range after Jordan Stockley rose to meet the cross.

Preston had their tails up as Davies headed narrowly wide from a corner and Harrop tested McGovern again, but Norwich rode that storm and would soon finish off their hosts.

Ripley hauled down Idah as he ran through on goal, collecting a yellow card, and the teenager coolly slotted home the penalty for his hat-trick.

There was still time for Harrop to score a second for Preston, finding the far corner from close range from Bodin’s neat pass, but Idah had already done enough to send Norwich through.

Adam Reach struck a second-half winner as Sheffield Wednesday beat Premier League opposition in the FA Cup for the first time in 27 years with a 1-0 win at Brighton.

Owls winger Reach smashed home a deflected drive from the edge of the box 25 minutes from time to earn the Sky Bet Championship side a narrow third-round success at the Amex Stadium.

Wednesday’s previous win over top-flight opposition in this competition came courtesy of goals from Chris Waddle and Mark Bright at Wembley in the 1993 semi-final against city rivals Sheffield United.

However, a memorable day on the south coast was tempered by a suspected knee injury suffered by 12-goal top scorer Steven Fletcher.

Below-par Albion, last season’s semi-finalists, could have few complaints about the result and rarely threatened to force a replay at Hillsborough before being jeered off by sections of the home support.

The Seagulls, sitting 14th in the top flight, made seven changes for the tie, with Aaron Connolly appearing as a second-half substitute.

Harry Arter climbed off the bench to dump Aston Villa out of the FA Cup with a spectacular long-range strike.

The midfielder had been on the pitch for barely 90 seconds when he let fly from 25 yards to seal a 2-1 win for Championship Fulham.

Anwar El Ghazi had earlier cancelled out Anthony Knockaert’s cracker, but Arter’s rocket fired the Cottagers through to round four.

Defeat may well end up being a blessing in disguise for Villa, however, as they battle to stay in the Premier League and begin their bid for a place in Carabao Cup final against Leicester on Wednesday.

These sides last met at Wembley in the 2018 Championship play-off final when Fulham clinched promotion.

They went straight back down and now, with Villa threatening to do the same and Fulham in the play-off spots, priorities for both clearly lay elsewhere.

Paul Mullin scored an 87th-minute penalty as Tranmere came from three goals down to seal a remarkable 3-3 draw in the third round of the FA Cup at Watford.

Tom Dele-Bashiru opened the scoring in his first start for the Hornets, before Nathaniel Chalobah doubled the home side’s advantage just 117 seconds later.

Roberto Pereyra appeared to have put the game out of reach when he scored a third for last season’s beaten finalists after 34 minutes.

But in a stunning second half, Tranmere pulled one back shortly after the hour mark when Connor Jennings’ disallowed offside goal was overturned by VAR.

Defender Manny Monthe then struck with 12 minutes remaining before Mullin converted from the spot after VAR determined debutant Mason Barrett had fouled Corey Blackett-Taylor in the box.

Pereyra was then sent off for foul play to cap a miserable second half for the Vicarage Road side.

Tiger Roll to return on the flat at Navan on Thursday 08:22
Exeter’s Rob Baxter: Covid-19 poses threat to rugby’s viability 08:18
Waterford pull out of Antrim clash due to Covid-19 concerns 08:43
Golf courses to close under Level 5; Andy Farrell names team for Italy clash 07:52
Connacht coping with Covid case and injuries ahead of trip to Edinburgh 07:00