FA Cup draw: Liverpool will face either Bristol City or Shrewsbury in next round 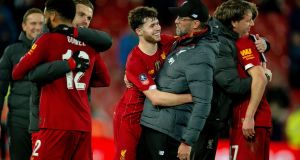 Liverpool will be away to either Bristol City or Shrewsbury in the fourth round of the FA Cup. Photograph: Peter Powell/EPA

Liverpool will face lower-division opposition in the form of either Bristol City or Shrewsbury in the FA Cup fourth round after seeing off Everton in the Merseyside derby on Sunday.

Fulham’s reward for knocking out Aston Villa on Saturday is a daunting trip to the Etihad Stadium to face FA Cup champions Manchester City .

Should League One Tranmere get past Watford, having come from 3-0 down to draw at the weekend, they will host either Manchester United or Wolves.

Rochdale, who also secured a replay against a top-flight side, will entertain Oxford if they can finish the job against Newcastle.

Chelsea head to Hull, Leicester travel to Brentford and Tottenham, should they win their replay against Middlesbrough, will be away at Southampton.

Former West Ham manager Slaven Bilic will take his West Brom side to the London Stadium.

After victory over Leeds on Monday night, Arsenalwill travel to Bournemouth while an all-Premier League showdown sees Norwich head to Burnley.

Sheffield will migrate to London for the weekend after United were drawn at Millwall while Wednesday landed QPR.

Northampton, the lowest-ranked side definitely through, host Wayne Rooney and Derby.

The ties will take place over the weekend of January 25th-27th.