Racism is most definitely interfering with the game - on every level 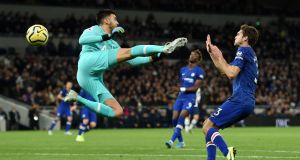 Paulo Gazzaniga of Tottenham Hotspur collides with Marcos Alonso of Chelsea in the area during their Premier League clash on Sunday in Tottenham Hotspur Stadium, resulting in a penalty awarded to Chelsea. Photograph: Clive Howes/Chelsea FC via Getty Images

“Ladies and gentleman, this is a security announcement. Racism is interfering with the game.”

You can say that again. Welcome to Britain, 2019, a place of division and ugliness, a place where a Premier League football match can end with eight minutes of added time for time-wasting, VAR and monkey chants; and a place where racist behaviour is most definitely interfering with the game.

This was a wretched occasion for Tottenham Hotspur in ways that go far beyond a 2-0 home defeat by a hugely impressive Chelsea team. You can raze the old structures, you can build a beautiful, gleaming stadium. Unfortunately, what you fill it with might not match the modernising dream.

Midway through the second half at the Tottenham Hotspur Stadium there was a sudden stop to the game, like a needle jumping from its groove. We know how this looks now, that familiar spectacle of players milling around, referee in the centre, ball disregarded, a sense of the day starting to fall apart a little. TV pictures would show the source, Antonio Rüdiger indicating quite clearly that he had been the subject of racist abuse from some part of the crowd in the corner by the home end. Rüdiger informed the referee.

The referee informed both managers. And three times before the end of the game the same statement was read over the stadium PA, warning spectators in a robotic monotone that racism was happening, and suggesting there might be consequences of it carried on, although not apparently the ones laid down by Uefa, Fifa and the Premier League.

Under a straight reading of the rules the second announcement ought to have led to the game being suspended. It didn’t. There will now be a process of unravelling to determine why the stadium PA continued to announce the presence of racist abuse, while the club itself later maintained this was simply a single incident. In which case, why keep reading the statement, which was phrased in the present tense as an ongoing incident? Why shout fire again? Something doesn’t add up here.

“I hate racism in society, I hate racism in football,” Tottenham manager José Mourinho said in his press conference after the game. Chelsea manager Frank Lampard was fairly non-committal, as he perhaps has to be, condemning racism in all its forms but still talking of needing to have it confirmed this did indeed happen, stating he hadn’t spoken to anyone about it (a strange thing in itself if it were indeed the case: his player and fellow club employee clearly suggested he had been racially abused).

One immediate thought presented itself. This was an A-list occasion in the world’s most globally successful sporting league. It was watched around the world by hundreds of millions of people, and played in a stadium that is in itself the fruit of a vast and much-trailed investment. The list of commercial partners across every medium is vast, from broadcasters to sponsors to pitchside placards, to ad break stings and shirt logos.

If indeed this was the act of a single racist, who should be held to account? An entire stadium? An entire sport?

What does it take to bring an occasion like this to a stop? What kind of will does it take, what kind of determination, what kind of moral courage to make Tottenham versus Chelsea the first high-level club game anywhere in the world interrupted, perhaps even suspended for racist abuse under the new protocols? We didn’t find an answer here. On the face of it this was because there was only one incident, notwithstanding the repeated, and indeed highly confusing announcements.

We will of course be urged to keep this in perspective. The stadium holds 60,000 people. If indeed this was the act of a single racist, who should be held to account? An entire stadium? An entire sport? The world beyond? It has become a remarkably unremarkable statement to point out that this divisiveness, this lack of respect comes directly from the UK’s elected politicians. But it bears repeating every time.

Both major parties in the recent general election were led by men with questions to answer on this score, no matter what their own apologists might choose to screech in public. This matters, and matters in every public space, every place where citizens interact. Walk down Tottenham high street and you can see first-hand the crush of cultures, the cheek-by-jowl existence that can be so easily inflamed by carelessness, stupidity, disrespect, deliberate dog-whistle politics.

If it is proven now that home supporters did racially abuse Chelsea players, Tottenham must be punished as a club

At the same time it is all too easy to state that racism is therefore a societal problem, that football doesn’t create or even incubate this behaviour, is instead simply an amplifier. Football does also have a duty, both legal and moral, to police what happens within its own boundaries, to provide a living example of how to deal with this poison when it enters its walls. Is this happening right now?

Zero tolerance for intolerance: if it is proven now that home supporters did racially abuse Chelsea players, Tottenham must be punished as a club. Clearly the perpetrator should be banned if the offence is proven. English football has, in the past been willing to lead: it needs to lead here.

Outrage at the Bulgarian hard right is one thing – and that was, it should be said, a concerted act with what seemed to be the tacit approval of officials and home journalists after the game. But football’s wealth, status and influence comes solely from the people: players, spectators, employees. It has a duty to protect and care for these people. How this latest incident is dealt with will be a test, one English football really does need to pass.