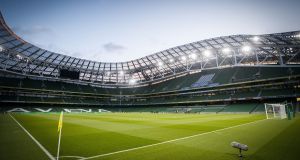 The Schoolboys Football Association of Ireland say the €50,000 they paid for a the use of a corporate box at the Aviva stadium was good value. Photograph: Oisín Keniry/Inpho

The Schoolboys Football Association of Ireland (SFAI) have defended their €50,000 outlay on a corporate box at the Aviva Stadium – a deal they admit was triggered by an approach from John Delaney.

According to the largest affiliate league in the country, the former chief executive engineered the deal just over 12 months ago when the Football Association of Ireland had cashflow issues.

“The SFAI, like many of the FAI affiliates, did not want to see their parent body suffer, and in a desire to assist the national association overcome the financial problem, it was brought to the SFAI Executive where it was unanimously approved,” they said in a statement on Friday evening.

The SFAI insist the 12-seat corporate box – costing €10,000 per annum for five years – represents better value to their previous commercial arrangement for premium facilitates at the national stadium.

They had shelled out the same amount yearly to buy four tickets in the Jack Charlton Lounge – a hospitality suite named in honour of the legendary former Ireland manager.

In their defence, the umbrella organisation for the 31 schoolboy/schoolgirl leagues claim there was no dissenting voices to the deal, either at executive or council level. They said all leagues were mandated to inform their clubs.

“The SFAI has, at all times, acted in the best interests of the schoolboy game and has appropriate governance and accountability measures in place,” they said, adamant the box has proven hugely beneficial for sponsors, both existing and prospective.

The schoolboy body have been in the news for the past fortnight, not just from the corporate box but over their seat on the FAI’s interim board.

SFAI chairman John Earley spent almost four years as a director during Delaney’s tenure and refused to quit when sports minister Shane Ross demanded a full clearout. Even on the day that the FAI’s shocking accounts were released, revealing liabilities of €63 million, the Tipperary native wasn’t for moving.

He eventually bowed to pressure last week, following fellow survivor Donal Conway out of the boardroom. The FAI president will step down next month.

Plans to replace Earley with Paddy Dempsey were on course last Saturday when his candidature was endorsed by his schoolboy league colleagues. Despite expressing his pride at the elevation, the former League of Ireland referee withdrew on Sunday.

As chairman of the Dublin District Schoolboys’ League, one of the many affiliates to publicly support Delaney in March, his suitability was widely questioned during the intervening period.

The SFAI have since proposed Ursula Scully for the vacancy. The likely elevation of Scully – the committee ratifying her nomination is mostly comprised of her colleagues in the SFAI – will also help the FAI work towards its gender balance requirements.

Aidan Horan’s recommendation in his governance review group report to have four females in situ on the 12-person board by 2021 was passed at an emergency general meeting in July. The seven current board members are male.