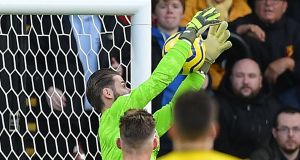 The odds remain stacked against Watford, relegation a cloud that continues to hang over them, but heading into Christmas all involved with the club will no doubt be filled with festive cheer and a renewed sense of hope following this most stirring of victories. Manchester United came and Manchester United were ultimately conquered by a team that, having looked listless throughout the season, finally appear to have the heart and resilience required in a dogfight.

It was not pretty but it was effective and for Nigel Pearson in his first home game in charge of Watford, proof that he has a group of players willing to follow his methods. There had been evidence of that in defeat by Liverpool last week and even more so here as the men in yellow and black recorded a league victory at Vicarage Road for the first time since April and one that moves them level on points with Norwich in 19th.

Ismaila Sarr and Troy Deeney got the goals in a four-minute burst after the interval that utterly swung the game in their favour. For United it was a harrowing spell and for no more so than David De Gea whose horrific error led to the first goal. The Spaniard should not shoulder all responsibility for what happened to United here, however, for this was a collective failure by the men in red on what was the anniversary of Ole Gunnar Solskjær’s first game in charge of the club. Safe to say he will not be toasting the anniversary.

Not for the first time in recent seasons, the coach carrying United’s first-team squad arrived late, pulling up outside Vicarage Road only an hour before kick-off. It was a coach that included Paul Pogba, who returned for the visitors having recovered from an ankle injury that has kept the Frenchman out of action since the end of September and required him to undergo surgery.

He was only among United’s substitutes, however, as Solskjær named an unchanged team from that which drew with Everton last week. Watford were also unchanged from the team that lost to Liverpool, which was no surprise given how well they acquitted themselves at Anfield.

The hosts had been well organised on Merseyside and that was the case here as they sat deep in their 4-2-3-1 formation and appeared content for United to steadily dominate possession and territory and look to hit them on the counterattack. It was an approach that nearly cost them on six minutes, however, as United opened up Watford with a slick move that ultimately ended with Anthony Martial dragging a shot wide of the far post.

That should have been the cue for United to stamp on Watford’s throat but instead their approach play become slow and sloppy, allowing the hosts to grow into the contest. They were still largely playing on the counterattack but doing so with a measure of confidence. What let Watford down was the thing that has let them down all season – an end product, seen on 26 minutes when the hosts sprung forward after Marcus Rashford’s latest giveaway of possession only for Deeney to fail in his attempt to get a clean shot away, the Watford captain instead having his effort blocked by Luke Shaw.

And it appeared United were going to make the hosts pay for that sloppiness on 33 minutes when Martial set Lingard clean through on goal with a quick, well-weighted pass. The England player drove past Christian Kabasele and faced with the outrushing Ben Foster appeared set to hit a low shot past him. Instead Lingard made the curious decision to chip the goalkeeper and could only look on with anguish as the ball sailed over the bar.

It was a moment which summed up the quality of United’s play in the first half – a little bit of good let down by a whole lot of bad. This was proving to be another listless and ineffective display away from home by Solskjær’s men and it was damning of the contest as a whole that both sides went into the break having not had a shot on target between them.

It felt as if this game was heading for a goalless draw but that all changed four minutes after the restart. Watford were presented with a free-kick on the right-hand side following Scott McTominay’s foul on Sarr. Will Hughes swung the set piece into the area and following a flick-on, the ball landed at the feet of Sarr just outside United’s six-yard area. He hit a shot and, as had been the case at Anfield, it was poorly struck on the part of the 21-year-old, the ball bouncing into the turf and rising up for what seemed an easy catch for De Gea.

But then came the Spaniard’s horror moment as the ball squirmed through his hands like a bar of soap and dropped into the goal.

Cue a sense of shock followed by immediate joy among the home supporters and as their players celebrated, De Gea lay face down in the turf, the sense of personal humiliation all too clear.

De Gea had to deal with the ball going past him again soon after, this time as Deeney struck a thumping penalty down the centre of the goal following Aaron Wan-Bisska’s clumsy challenge on Sarr.

United were on the ropes and Solskjær reacted by making a couple of changes, bringing Mason Greenwood on for Daniel James and then, on 64 minutes, it was time for Pogba to make his entrance, the 26-year-old replacing Lingard.

The visitors drove forward in the final stages and created a flurry of chances but it proved too little too late.

Panorama show Mo Farah changed account to anti-doping investigators 14:41
Jack Conan returns to full training ahead of schedule 14:24
Irish Olympic hopefuls fly back from Italy amid coronavirus outbreak 14:12
All in the Game: how Firmino’s agent made him faster . . . on his laptop 14:00
Questions raised over Ireland v Italy fixture due to coronavirus 13:53

1 Six Nations: No place to hide for Ireland’s misfiring captain
2 Panorama show Mo Farah changed account to anti-doping investigators
3 Questions raised over Ireland v Italy fixture due to coronavirus
4 ‘Ireland’s honeymoon period is over’ - buoyant English press reaction
5 All in the Game: how Firmino’s agent made him faster . . . on his laptop
Real news has value SUBSCRIBE