John Earley resigns from the board of FAI 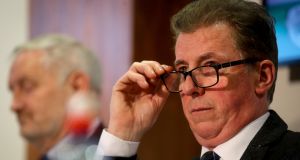 John Earley has resigned from the board of the Football Association of Ireland, the organisation confirmed in a statement issued on Thursday evening.

In it, the organisation said that Earley, who is the chairman of the Schoolboys Football Association of Ireland, had informed association president Donal Conway of his departure by letter, saying he “had made the decision in the best interests of Irish football”.

With Conway having already announced that he is to go before the end of January, the move clears the way for the association to have a board entirely different to the one that had served during former chief executive John Delaney’s time at the organisation, complete with independent members, in place within a matter of weeks. This is something the association it will feel should help in its effort to restore normal relations with Minister for Sport Shane Ross and the government.

1 David Clifford sends everyone back to their corners unbeaten
2 Six Nations: A 21st-century tournament that saw Irish rugby come of age
3 Six Nations: Ireland are contenders but England still the team to beat
4 Mike Catt hopes to have Irish backs purring in Six Nations
5 Ashleigh Barty now living up to all her earlier promise
Real news has value SUBSCRIBE
Crossword Get access to over 6,000 interactive crosswords