Can divine De Bruyne create a miracle for Manchester City? 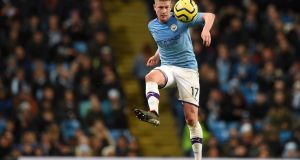 For Manchester City there is hope, and its name is Kevin. It may take something miraculous for them to close the 11-point gap to the leaders, who have a game in hand, but there is something miraculous about Kevin De Bruyne’s form at the moment. His performance against Leicester on Saturday was extraordinary, somehow both furious and measured, a blur of activity that was also precisely targeted.

Four shots, two of them on target. Seven key passes. Two successful dribbles. Two successful crosses. Five tackles made. The numbers give some indication of the scale of his performance but only some. De Bruyne is playing with such energy at the moment that he seems to defy our basic notions of how time and space function. You watch him go to close a defender down, follow the flight of the ball as it’s hacked clear and suddenly there he is underneath it as it comes to earth again, an ability previously thought to be restricted to N’Golo Kanté in his two seasons of title-winning pomp and the Beano character Billy Whizz.

There is a rage about De Bruyne’s play at the moment. For the most part that is controlled – although there was a strange moment just before the hour on Saturday when he was booked for dissent, his outburst at Mike Dean seemingly born of his disbelief that neither Gabriel Jesus nor Raheem Sterling had managed to score after he had taken Kasper Schmeichel out of the game and rolled the ball across goal – but it does seem as though he feels he has something to prove. Perhaps someone had told him he came only 12th in the Guardian’s poll of the top 100 male players of the year.

But to focus on that fire and the ultra-commitment it seems to generate – even his own body couldn’t keep up in the end and he was forced off in injury time with cramp – is to risk underestimating the intelligence of the movement. De Bruyne’s notional starting position was, as usual, as the right-sided of City’s pair of “free eights”, but he was very much more advanced than Bernardo Silva on the other side. At times – as at Arsenal the previous weekend – he seemed almost to be playing as a No 10 just behind Jesus, but his position was always to the right of centre, so he operated almost as an old-fashioned inside-right, although one with a far greater sense of his defensive responsibility than would have been traditional.

The effect was two-fold. From a defensive point of view, it meant De Bruyne was higher up the pitch and so the simple pass from Caglar Söyüncü out to Ben Chilwell became much riskier. Leicester went into the weekend as the most effective counterattacking side in the Premier League, while Manchester City had let in the third-highest proportion of their goals conceded to the counterattack. Jamie Vardy’s strike on the break was entirely foreseeable and had, as so much of Manchester United’s threat had in the derby two weeks ago, come down the City right.

Mahrez was excellent, but that was largely because De Bruyne created the space for him to be excellent

That remains an area of concern and, while City were almost entirely in control, Vardy did have another similar opportunity five minutes after the goal. There is something still not quite right with how City are pressing and there are sure to be inquests about how Chilwell and Harvey Barnes found such space on that flank to spring the counter from which Vardy scored. De Bruyne’s high starting position at least kept that threat to a minimum and those two Vardy chances were aberrations rather than part of a consistent stream.

But De Bruyne’s positioning also made a huge difference from an attacking point of view. That it is hard to define exactly where he was playing is not only an issue of classification. If there is no precise word for his position, it probably also means that it’s not clear whose job it is to deal with him. Perhaps James Maddison could have dropped deeper, but that is not really his game and risked leaving Vardy isolated. Perhaps Wilfred Ndidi could have shifted left but had he done so it would have left a central chasm between Leicester’s defensive and midfield lines. In the end, Chilwell tried to pick him up, but that meant abandoning Riyad Mahrez.

Again and again in the first half, Benjamin Mendy picked out Mahrez in space with booming crossfield passes. The Algerian didn’t just score the equaliser, he also had 10 shots – twice as many as every player put together in the game between Bournemouth and Burnley. Mahrez was excellent, but that was to a large extent because De Bruyne created the space for him to be excellent.

City’s pursuit of Liverpool looks impossible, but De Bruyne’s current form is also impossible. While he is fit and playing like this, the normal rules may not apply.