A look ahead to the weekend’s cross-chanel football 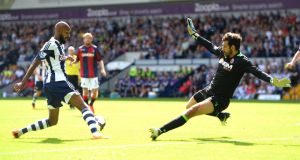 Cardiff will be without their £7.5million Danish striker Andreas Cornelius due to an ankle injury sustained against Accrington in the League Cup. Manager Malky Mackay is likely to name the starting line-up that claimed a stunning victory over Manchester City last weekend, having made 11 changes for the Accrington fixture.

Everton boss Roberto Martinez is expected to bring back all his big names. Manchester United targets Leighton Baines and Marouane Fellaini were substitutes for the League Cup win over Stevenage, with the latter scoring the winner after coming off the bench. Darron Gibson (knee) and Antolin Alcaraz (hamstring) are unlikely to be involved.

Crystal Palace again look set to be without winger Jerome Thomas because of an ankle problem. Midfielder Yannick Bolasie (hamstring) is also sidelined, while captain Paddy McCarthy (groin) continues his rehabilitation, along with forward Glenn Murray (knee). Jason Puncheon is in line to make his home debut and veteran striker Kevin Phillips could face his former club.

Sunderland midfielder Stephane Sessegnon misses out after being arrested and charged with drink driving. Striker Steven Fletcher will hope for a first appearance for the club in more than five months after recovering from ankle surgery, having been an unused substitute for the League Cup win over MK Dons on Tuesday.

Manchester City defender Matija Nastasic is set to return to action after his recent ankle injury, having been an unused substitute at Cardiff last week. He should replace makeshift centre-back Javi Garcia. Captain Vincent Kompany (groin) and fellow defender Micah Richards (hamstring) remain on the sidelines.

Suspended striker Yannick Sagbo is the only confirmed absentee for Hull. The likely return of Stephen Quinn after a hamstring problem is good news for manager Steve Bruce. Bruce made 11 changes for the midweek win against Leyton Orient and has not ruled out doing the same again as he recalls his first-choice players.

Midfielder Yohan Cabaye could return to the Newcastle squad as the Magpies brace themselves for a possible improved bid for the Frenchman from Arsenal. Striker Loic Remy, the club’s only senior signing to date this summer, could be involved from the bench after recovering from a calf problem, but midfielder Cheick Tiote (groin) joins winger Jonas Gutierrez (knee) and suspended defender Steven Taylor on the sidelines.

Fulham goalkeeper Maarten Stekelenburg is likely to be missing again due to his shoulder injury. Fellow summer signing Fernando Amorebieta’s debut remains on hold as he nears match fitness, while Kieran Richardson is out for three more weeks with a hamstring complaint.

Norwich defender Ryan Bennett could miss out after needing stitches in a gashed left knee sustained against Bury in midweek. Striker Gary Hooper is still out with a shin problem but should be fit for the Tottenham game following the international break. Midfielder Elliott Bennett is recovering from surgery on a cruciate ligament injury.

Southampton duo Guly do Prado and Jos Hooiveld will be assessed after both missed the League Cup win at Barnsley through illness. Manager Mauricio Pochettino confirmed several other unnamed players need to be looked at, while record signing Dani Osvaldo could make his first start for the club.

West Ham midfielder Alou Diarra is expected to be absent for the rest of the season after sustaining a serious knee injury in the League Cup victory over Cheltenham. Striker Andy Carroll (foot) and defender George McCartney (knee) are also absent, but could be back in contention after the international break.

Stoke striker Peter Crouch comes back into contention after missing the League Cup win over Walsall due to illness. He will be vying for the lead forward role alongside Kenwyne Jones following the latter’s hat-trick against Walsall. Midfielder Jamie Ness is still struggling with a thigh problem and misses out.

Arsenal defender Laurent Koscielny is available after serving a one-match domestic suspension. Midfielder Mathieu Flamini is likely to go straight into the squad as he begins his second spell at the club. Aaron Ramsey has recovered from a minor groin injury, but forward Lukas Podolski is set for up to three months out with a torn hamstring. Defender Thomas Vermaelen (back) and midfielder Mikel Arteta (thigh) continue their rehabilitation, along with Alex Oxlade-Chamberlain and Abou Diaby (both knee).

Tottenham winger Aaron Lennon is a doubt because of a foot injury. Defender Benoit Assou-Ekotto and striker Emmanuel Adebayor will not feature as they are not fully fit, while star forward Gareth Bale misses the game as he edges closer to a move to Real Madrid. New defender Vlad Chiriches is unlikely to feature while striker Jermain Defoe and midfielder Lewis Holtby are pushing for starts.

Liverpool centre-back Martin Skrtel is set to make his first appearance of the season after recovering from a knee problem. However full-back Aly Cissokho will play no part after suffering an ankle injury in Tuesday’s Capital One Cup victory against Notts County that could see him sidelined for four to six weeks. Two other Liverpool players who came off injured in that game, defender Kolo Toure (groin) and midfielder Joe Allen (hamstring), are rated doubtful.

Manchester United boss David Moyes could name an unchanged starting line-up, with defender Phil Jones expected to recover from the blow to his back he sustained during Monday’s goalless draw with Chelsea. Rafael (hamstring) is still out injured, while Nani (groin), Jonny Evans (ankle) and Javier Hernandez (hamstring) were not involved against Jose Mourinho’s men.

West Brom striker Nicolas Anelka is available after missing the last two games while on compassionate leave. His return is timely as Matej Vydra misses out, having sustained a hamstring injury in the League Cup win over Newport on Tuesday. With goalkeeper Ben Foster out for 12 weeks with a stress fracture of a bone in his right foot, Boaz Myhill should start despite a wrist injury. Midfielders Zoltan Gera, George Thorne (both knee) and Steven Reid (knock) remain sidelined.

Swansea manager Michael Laudrup will hope to restore Ashley Williams, Wilfried Bony and Jonjo Shelvey to his side after they missed the Europa League meeting with Petrolul Ploiesti due to minor injuries. Nathan Dyer and Neil Taylor will again be absent with hamstring and thigh injuries respectively, but Dwight Tiendalli could come into contention after rejoining the club on Thursday.