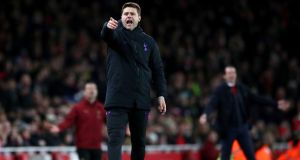 Tottenham manager Mauricio Pochettino was stopped from answering questions on speculation linking him to the Manchester United job at a press conference on Thursday.

Pochettino is United’s first choice to replace the sacked José Mourinho at Old Trafford, but addressed the situation on Tuesday when he insisted he was focused on his job at Spurs.

The story has not gone away, though, and at a press conference to preview Sunday’s Premier League game at Everton, questions on the subject were repeatedly shut down by the club’s press officer, who insisted the matter had already been discussed.

Cameras were then asked to be switched off as the reporter posing the questions stood his ground, with a debate that lasted just under two minutes.

With United saying they will appoint a permanent manager in the summer, it could be a long six months for the club as Pochettino’s future is likely to continue to be the main topic of conversation.

Ole Gunnar Solskjaer has been selected as United’s caretaker manager until the end of the season and he will be unveiled on Friday, but that probably will not shift the agenda too much.

It is little surprise that the Argentinian is on United’s wish list given the job he has done at Spurs.

As well as progressing in the Champions League and being in the top three of the Premier League, they advanced to the Carabao Cup semi-finals with a 2-0 win at north London rivals Arsenal on Wednesday.

A two-legged tie with Chelsea is next up for them after Christmas and Pochettino believes that an elusive piece of silverware still seems a way off.

He said: “Closer? I think it’s a long way still. I think we’re playing against Chelsea over two legs and of course it’s going to be our fourth or fifth semi-final in four and a half years. But we’re so far away. There’s a lot of work to do.”

The two games against Chelsea add to what is already a hectic schedule for Spurs, who could play as many as nine times in January.

And on top of that, no side have less time in between the festive fixtures as Pochettino’s team.

“I’m not going to complain,” he said. “In the previous season we enjoyed more days, a bigger gap between the games.

“Now it’s the toughest period and more than ever we’re going to use the squad. I feel so sorry for people who don’t like rotation. It’s so important all are going to be ready to compete. We need to whole squad.”

Jan Vertonghen is back in training after a thigh injury, but will not be fit to play at Everton, despite his own assertion that he is fit, while Mousa Dembele still remains a couple of weeks away after an ankle injury.