Hazard comes off bench to see Chelsea through 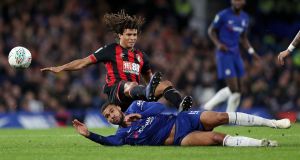 Chelsea had hoped they might force passage into the semi-finals without calling upon Eden Hazard but, at present, they feel like a team reliant upon their Belgian inspiration. This tie had been threatening to run aground on a shoot-out when, six minutes from time, the substitute combined with Pedro in the clutter of the penalty area.

Bournemouth only left him untracked for a split-second while Pedro wriggled to the byline, but Hazard is too good to be allowed any kind of leeway. The Spaniard’s return pass squirted back for Hazard to spit away a first-time shot which struck Charlie Daniels on the arm from close range. The deflection left Artur Boruc wrong-footed and beaten, the ball looping into the net to send Maurizio Sarri’s side into the last four.

Emerson Palmieri and Olivier Giroud should have added a second in what time remained but, even so, this was a cruel way for Bournemouth’s attempt to reach a first semi-final to be snuffed out. A seventh defeat in eight matches was no real reflection on their play, with the home side nullified and unsettled for long periods. But their desperate pursuit of an equaliser, with Jermain Defoe flung on and the ball pinballing free in the hosts’ penalty area deep into stoppage time, came to nothing.

Even with six changes from their win at Brighton, and Eden Hazard resting his wounded ankles on the bench from the outset, the strength of the Chelsea selection was something of a surprise and perhaps reflected Sarri’s underlying motivation to break his trophy duck. And yet, for all the upbeat tempo imposed from the outset by a midfield bristling with intent, the hosts departed frustrated and still level at the interval with Sarri, forever meandering out of his technical area and across that of his opposite number, a picture of agitation in the drizzle.

His assistants, nodding in agreement as they huddled on the bench, bore the brunt of his exasperation. It was the manner in which the bright start had fizzled out which left the Italian enraged, the muscular energy and aggression summoned by Ruben Loftus-Cheek down the right and Willian’s eager running on the left, seeking to exploit the vacant space behind Steve Cook, having failed to yield a lead. That pair had supplied their best opening, Loftus-Cheek’s interplay with Mateo Kovacic having liberated the England midfielder who spread the play gloriously to the marauding Willian on the opposite side. The Brazilian collected and bore down on goal, only for Artur Boruc to summon a fine save from point-blank range with a flailing right arm as he sprinted from his goalline.

Yet for all that the Pole twice thwarted Ross Barkley as Chelsea monopolised possession, the clearer chances in a drab first half were arguably carved out by the visitors. Bournemouth’s recent dismal form might have explained the nervy start, a similar number of changes having forced Nathan Ake into midfield against his former club and the whole team feeling rather makeshift, but they eventually settled and threatened on the counter.

David Brooks seemed to relish a more advanced, central berth. Lys Mousset and Jordon Ibe, who have both been relatively under-used in the top-flight, unsettled retreating markers whenever offered the chance to spring forward on the break. It took a fine save from Kepa Arrizabalaga, offered a rare chance in this competition with Willy Caballero shivering on the bench, to deny the Frenchman as half-time approached.

Then there was Callum Wilson. The England striker has impressed Chelsea, with the club even appearing to indulge upon a rather uncharacteristic charm offensive as if to woo the 26-year-old in the buildup to this tie. David Luiz had gone as far as to suggest Wilson could “play at any of the best clubs in the world”, with Gianfranco Zola similarly effusive in his praise of the forward. The locals remember his searing display in Bournemouth’s 3-0 win here back in January and, when Mousset sprinted clear of Antonio Rüdiger and fed the forward with a diagonal pass into space, those in the Matthew Harding stand must have feared the worst. Yet with a clear sight of goal the finish was skewed wide of the far post.

That, in truth, rather summed up the anxious nature of too much of the finishing, with the closest either side had come to forcing an advantage a fizzed shot from Loftus-Cheek which kissed the outside of the post. Sarri eventually felt compelled to fling Hazard into the fray just after the hour mark, with Eddie Howe replying with the introduction of Ryan Fraser moments later. That at least opened up the contest, with both defences increasingly stretched and heaving to contain energetic opponents. Loftus-Cheek, enjoying his most impressive form in a Chelsea shirt and benefiting from Hazard’s subtle touch, squared across goal but no one could muster a finishing touch, while Wilson’s half-volley struck César Azpilicueta to prompt rejected calls for a penalty. In the end, it was Hazard who prised the teams apart.