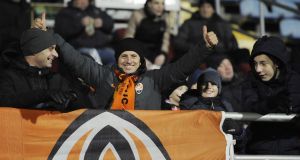 When the sun went down on the Metalist Stadium in the eastern Ukrainian city of Kharkiv last week, the streets were calm. The air was hellish cold, and the snow that had fallen the previous day had turned to loose black slush. The people of Kharkiv went about their usual business.

The stadium should have been preparing for a Champions League fixture, due to have been played between the French side Lyon and Ukrainian champions Shakhtar Donetsk here the following night.

Instead, a state of martial law declared by the country’s president on November 26th meant those plans were ripped up. An announcement came as late as Friday from Uefa that the game was to be moved 480km to the east to the capital, Kiev, citing the ‘security situation’ in Kharkiv.

“It’s a nonsense decision,” says Anton Ivanov. He is general manager of Metalist Kharkiv, the club that has welcomed Shakhtar to share Metalist Stadium since they were forced to flee war-torn Donetsk in 2014.

“A lot of Kharkiv businesses are upset about the relocation to Kiev because of lost revenue. And for what?

It’s true that there is little visible sign in Kharkiv of the emergency powers that parliament granted to the president last month, following the seizing of two Ukrainian ships by Russian forces in the Crimean Sea of Azov.

Still, the president of last Wednesday’s opponents Lyon complained that the club had been unable to find a provider willing to charter a flight to the city, citing security concerns. Arsenal’s game against Vorskla, from the city of Poltava, on November 29th was moved to the capital at just 48 hours notice, despite Poltava not falling within the regions affected by the new security measures.

Certainly someone is taking these concerns seriously, even if the citizens of Kharkiv appear un-phased.

Taras Zhyvokorentsev is a founder member of Kharkiv Multikulti, an organisation that works to assimilate the city’s many international students into Ukrainian life. He sees little in November’s governmental decree that reflects any escalation in the security situation here.

“The law means that the government has some powers to introduce curfews and limit the internet,” says Zhyvokorentsev. “But none of this happened, nor looks likely.

“There have been maybe one or two more soldiers on the streets, but to not be able to play football here is a very strange decision.”

One popular theory in Ukraine is that martial law has been declared as a deflection tactic, engineered by under-fire president Petro Poroshenko in a bid to postpone the up-coming presidential elections that many believe he is destined to lose.

Either way, Shakhtar find themselves once again at the centre of the country’s political problems.

Shakhtar, like Donetsk itself, was a once great symbol of Soviet-era industry. Their orange and black shirts are designed to mimic the look of local coal miners as they emerged from the collieries. Today, they are one of the great success stories of post-independence Ukraine. Financed by the country’s richest man, Rinat Akhemtov, they have wrested the dominance of Ukrainian football from their great rivals Dynamo Kiev.

The club first sought to relocate to Kharkiv, where Ukrainian nationalism is less acute than in the west, in 2014. Eastern Ukraine has always been home to large, vibrant communities of ethnic Russians.

Those plans were scuppered by the downing of Malaysian Airlines Flight 17 over rebel-held Donetsk, for which Russian military personnel have been blamed by Kiev ever since. Uefa responded by banning international games from taking place anywhere near the Donbas border, including in Kharkiv.

On Wednesday, the Olympiskiy Stadium became the club’s third home ground since being forced out of Donbas. Buoyed by the success of the Lyon game, it is heavily rumoured that the club are considering moving permanently to Kiev.

The club is, to all intents and purposes, already based in the capital, and players and staff fly to Kharkiv only for matchdays.

“We really like playing in Kharkiv,” said Shakhtar’s charismatic Portuguese manager, Paulo Fonseca. “We are happy there. We got used to that stadium, there is a large number of our fans there.

“But in Kiev? Why not? This match proved that Shakhtar also have a lot of fans here. In this weather, not everyone would want to come to the stadium to watch football.”

Between 2014 and 2016, Shakhtar played their homes games in the far western city of Lviv. The arrangement was a flop. There is an east-west divide that cuts through Ukraine like a scar. It goes far beyond sporting rivalry. The western cognoscenti are anathema to the industrial spirit of the Donbas region.

Any fears that the club wouldn’t be accepted by the western metropolitan urbanites of the capital last week were assuaged by a warm reception. Those parts of the ground that were filled swayed with orange. Some even wore the miners’ helmets that used to be a feature of Shakhtar’s home games in Donbas. There are sizable communities of refugees from Donbas here in the capital. Last Wednesday night, they roared Shakhtar on.

Not that everyone inside the Olympiskiy Stadium was feeling in a welcoming mood. Before kick off, a group of Dynamo fans unfurled a less than friendly banner for their temporary guests, and flares that disrupted kick-off were also thrown onto the pitch.

“What I want to focus on is the fact that 39,000 fans were present at the stadium,” said Fonseca. “Not only Shakhtar ones but also those of other clubs. We felt their support throughout the match.

“They knew that this was not our hometown, that we were forced to play in Kiev, and supported us. That’s the most important thing. We should pay more attention to that. We should appreciate that kind of support.”

The game with Lyon finished 1-1, Brazilian striker Junior Moraes’s first-half goal cancelled out late in the game by a sublime curling finish from France international Nabil Fekir. The result eliminated Shakhtar from the Champions League, but they will be back next season.

“Nobody in Kharkiv sees Shakhtar as a refugee team,” says Ivanov back at Metalist Stadium. “This war came into out life suddenly, but we are still one nation. We have around 200,000 refugees from Donbas in Kharkiv, but they are Kharkiv citizens. So Shakhtar aren’t refugees. The people are happy to have them.”

All the signs now point towards an imminent end to that special relationship.