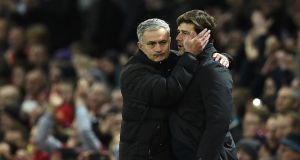 Mauricio Pochettino has refused to comment on rumours linking him with the job at Manchester United after José Mourinho’s departure. Photograph: Oli Scarff/AFP/Getty Images

Mauricio Pochettino insisted that he would not and could not comment on “rumours” linking him to Manchester United at the end of the season, as he declined to offer Tottenham any guarantees he would remain with them next season.

United sacked Jose Mourinho on Tuesday morning, after a dismal run of results, and they intend to appoint a caretaker manager until the end of the season, when they will make permanent choice to lead them forward. They considered a move for Pochettino in 2016, after the dismissal of Louis van Gaal, only to go, instead, for Mourinho.

Pochettino has since enjoyed three successive Champions League campaigns with Spurs – he has them in the last 16 of this season’s competition where they have been drawn to face Borussia Dortmund – and he has enhanced his reputation significantly. Pochettino remains of interest to the United executive vice-chairman, Ed Woodward.

Pochettino was asked whether he had any message for the Spurs fans who worry that he will be tempted by the Old Trafford vacancy.

“I am so focused in trying to deliver my best in this football club and now we have ahead very busy fixtures. Tomorrow we play another derby [at Arsenal in the Carabao Cup quarter-final] and I think all the people understand that we are focused on delivering our best job tomorrow.”

Pochettino was asked again whether he had a message for the Spurs support. “After nearly five years, what more do I need to say?” he replied. “From day one and not only in the coaching staff, the players, too – there are a lot of rumours that happen. That is the business today, it’s like this.

Pochettino took the opportunity to send his commiserations to Mourinho, with whom he enjoys a close relationship.