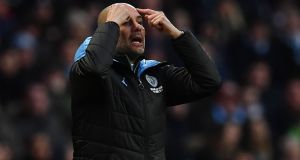 Pep Guardiola believes the League Cup should be dispensed with for the good of English football. The Manchester City manager says teams are currently overburdened by the hectic schedule and has pointed to the recent injuries picked up by Harry Kane and Marcus Rashford as evidence that the relentless workload during the season’s winter months is more than players can physically bear.

Guardiola has won the League Cup in two of his three full seasons at City, and his side lead Manchester United 3-1 after the first leg of this year’s semi-final, yet he is of the opinion the competition does more harm than good.

“Eliminate competitions, take out this competition,” he said when asked how to relieve fixture congestion over the festive period. “So less games, less competitions, less teams, more quality, less quantity. People can live without football for a while. It’s too much.

Guardiola believes the national team is currently suffering from the punishing calendar. “With that number of games players break down. I’m not surprised. I’m so sorry for Kane and Rashford. [The authorities] should reflect on it but all the managers complained about it and they don’t care. A distance of two or three days, again and again. The players suffer.

“They want to do well. Clubs have a lot of pressure to win or qualify for the Champions League and we push and push. The body says stop, it’s enough.”

Guardiola also defended Raheem Sterling, who is enduring a relative dry patch in front of goal after a prolific start to the season. “He has played more than 3,000 minutes,” he said. “His standards are continuing quite similar. Maybe he hasn’t scored in the last games but there are no doubts.”

Guardiola’s side travel to Sheffield United on Tuesday night looking to make up ground on the leaders, Liverpool, before hosting Fulham in the FA Cup on Sunday – a fixture in which City hope to welcome back Aymeric Laporte from a long-term knee injury.