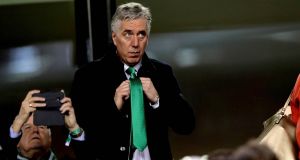 Uefa has announced that John Delaney has resigned his position on its Executive Committee with immediate effect.

The 52-year-old was elected to the body, effectively Uefa’s board of directors, in April 2017 and had more than a year remaining of his term but the inevitability of his departure had been regarded as a formality since his part in the financial crisis that has engulfed the FAI became public last March.

Delaney had already been sidelined from his roles at European level and did not attend either the women’s World Cup or the Under-17 European Championships, which were staged here in Ireland, last summer despite still notionally holding key positions in Uefa’s Women’s and Youth Committees.

No mention of the terms on which Delaney has departed is made in the statement but there may have been some financial settlement to prevent a prolonged dispute. The Irishman, who received €462,000 to part company with the FAI late last year, was understood to be receiving around €160,000 a year from Uefa when still a fully functioning member of the ExCo.

In what seems a generous statement given the circumstances, Uefa stated that: “During his time on the Executive Committee, John Delaney played a leading role in helping Uefa achieve many things. He was instrumental in the expansion of the Euro to 24 teams, which proved such a success in 2016. Several teams that may not otherwise have qualified proved that they have a contribution to make on the biggest stage, with Wales’ run to the semi-finals and Iceland’s elimination of England standing out as examples of this.

“He was an important figure in the move to centralise the TV rights across national team competitions - something which has benefitted all Uefa member associations and which was rolled out into the new Uefa Nations League tournament. Uefa wishes him well in the future.”

The move appears to sever Delaney’s last remaining significant ties to the game. It remains unclear whether he might still face disciplinary or other sanctions as a result of his actions during his decade and a half as chief executive of the FAI.