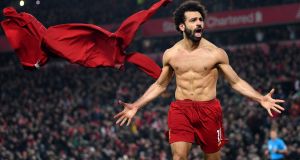 Liverpool are brilliant. They are top of the league by 16 points with a game in hand and will probably have the title wrapped up by the end of March. And yet at the same time, while acknowledging how preposterous it is to offer any criticism of a side that has taken 64 points from 22 games this season, there must be a sense that of late they’ve become a little bit sloppy.

In their past two league games, against Tottenham last week and then against Manchester United at Anfield on Sunday, they have come extremely close to drawing games they have dominated almost entirely. Giovani Lo Celso and Anthony Martial both missed extremely presentable chances to make it 1-1.

In both games Liverpool ended up under pressure in the final 10 minutes – on Sunday at least until Mohamed Salah added a second on the break deep in injury time. Tottenham they had broadly held at arm’s length, in a performance of great control; United they had pummelled for roughly a third of each half. And yet in each case two points could have slipped from their grasp.

Not that it really matters to Liverpool, of course, for anything other than the pursuit of records. At this stage their lead is unassailable and would be even if it were only 12 points. Perhaps that fallibility offers a note of caution before the Champions League knockouts, where a single goal carelessly conceded can have profound consequences. But actually the greater impact of the past two games may be for the losing sides. Those late rallies perhaps conjured the impression that all is not too far awry. But for United in particular, the gulf to Liverpool should be cause for major concern.

This was 2-0 going on 5-1. Liverpool’s opening goal may have come slightly against the run of play but, in the 20 minutes that followed, United were overwhelmed. It was the same story in the 12 minutes of the second half from kick-off to Fred’s chance. In both spells Liverpool were quicker, sharper, stronger and cleverer. In both they could have scored two or three times without it seeming outrageous.

There were goals ruled out for marginal decisions, the woodwork was struck and Salah somehow scuffed wide from eight yards with the whole goal at which to aim. Without being anything like the best football they have played this season, that was the level Liverpool can reach when they put their foot down – and it was a level high above United’s capacity.

Injuries do not help, of course. United are without their two best central midfielders and their best forward. That would destabilise any side. But then Liverpool had been without their first-choice holding midfielder from the end of November until eight minutes from time on Sunday – and their response to that has been 11 clean sheets in 15 games (and two of the games when they conceded came within 24 hours of each other). Their first-choice goalkeeper missed 11 games with a calf injury. Good teams with well-constructed squads overcome misfortune; weaker ones wallow in it.

Ole Gunnar Solskjær is becoming a master of discovering filaments of silver lining in the bleakest of clouds. If football management does not work out for him, a job in forensic pathology surely awaits. Here he talked of how well Fred had played, how committed United had been, how they had fought back after the barrage at the beginning of the second half. None of which was untrue – and Fred’s form over the past couple of months is arguably the brightest aspect of this season for United.

But there is a bigger picture. This was not quite taking consolation from Manchester City having sufficient respect for United that they picked a strong team against them in the Carabao Cup but it was rhetoric of the mid-table manager trying to draw positives from an entirely predictable defeat against a much better side.

And that is where United stand – not in terms of resources or stadium or fanbase or cachet, of course, but in terms of form.

They may lie fifth in the Premier League and the gap to fourth and implausible Champions League qualification may be only five points but from their 34 points from 23 games one can extrapolate that to 56 for the season. That would have been enough for fifth in 2003-04 but every other season in the past 20 years it would leave United seventh, eighth or ninth. It is eight points fewer than they got in their first post-Ferguson season, when David Moyes was sacked four games from the end of the season.

There is an understandable willingness for Solskjær to succeed and the manager is not the only problem, perhaps not even the biggest problem, at Old Trafford. Patience, without question, is a rare virtue in football but it does not take much for the search for positives to become a hunt for excuses. United have just been well beaten by a Liverpool side 30 points ahead of them and the message seems to be that they should be grateful it was not worse. United are sleepwalking towards mediocrity: somebody, some time, is going to have to wake them up.