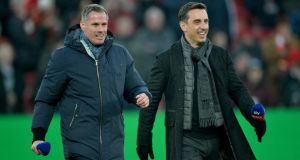 Gary Neville has launched his most vociferous attack on Ed Woodward, claiming Manchester United’s executive vice-chairman is fortunate to still be in a job and that the expensively-assembled squad’s position in the league is “unforgivable”.

The former United captain is a long-term critic of Woodward and was scathing of his recruitment that stands at around £850m in seven years in charge. His latest comments followed Liverpool’s 2-0 win over Ole Gunnar Solskjær’s team at Anfield on Sunday, which means the league leaders are now 30 points ahead of United.

“I saw a statistic two weeks ago that United have the second-highest wage bill in the world. And that’s the squad they’ve got. It’s unforgivable. It really is,” the 44-year-old told Sky Sports’ Gary Neville podcast. “I can’t believe the investment that’s been put into the squad in the last five, six, seven years and you end up with that out on the pitch.”

Neville did not name Woodward but it is clear who he referred to when questioning why United’s owners, the Glazers, have not removed Woodward. “I can’t change the ownership, no one can,” said Neville. “I’m struggling to understand why the ownership have persisted in trusting that management team to oversee the building of a Premier League title winning team since Alex [Ferguson] left [in May 2013].

“If you don’t lose your job for essentially overseeing that investment, that wage bill, and putting that team out on the pitch then I have to say something is really wrong. In terms of what the club needed to do for a number of years now – [it’s to] put the best in class football operators into that club and they’re not doing it. They’re not doing it and it’s a mess.”

Despite the defeat at Liverpool Nemanja Matic struck a positive note. “On the pitch, we felt: ‘We are in the game, we can score, we can create’,” the midfielder told MUTV. “We played some good football. In the last 35 to 40 minutes, we were the better side. But it’s hard. If you don’t score against this kind of team it’s hard to draw or to win.”