There was surprising warmth to Uefa statement announcing departure of Delaney 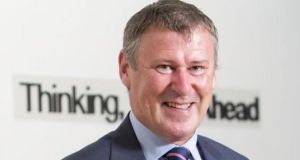 Gary Owens has been appointed interim CEO of the FAI.

On the day John Delaney vacated his position on the Executive Committee of Uefa, the FAI has announced the appointment of former Hibernian Insurance managing director Gary Owens as Interim Chief Executive of the organisation. The Dubliner, who continues to hold a number of business roles, will be the fourth person to occupy the role since Delaney departed less than a year ago.

Owens spent six years at the top of Hibernian (now Aviva) and was CEO of financial services group IFG for seven. He was also an independent director at AIG and is currently chairman of Diona, a mobile devices technology firm.

He has previously chairman of Athletics Ireland’s Board and was involved for a year as a consultant with the High Performance Unit of the Irish Amateur Boxing Association. For the past couple of years he has been the chief executive at Down Syndrome Ireland.

He replaces Paul Cooke in the role at the FAI. The former newspaper industry executive had stepped into the role two months ago when John Foley decided at the last minute not to take it on following the return to Uefa of Noel Mooney. Before that, the association’s Chief Operating Officer Rea Walshe had had a brief spell at the helm.

In its statement announcing the appointment, the association said that it intends to initiate the process of recruiting a full-time CEO over “the coming weeks”. Owens is described as possessing “specialist expertise in business re-structuring, turnaround strategies and governance structures” and recently appointed chairman Roy Barrett says “I look forward to working with him”.

Cooke, who had been understood to be interested in the role on a permanent basis returns to the role of Vice President.

Perhaps the most surprising aspect of Delaney’s departure from his roles at Uefa, meanwhile, was the warmth of the tribute paid to him by an organisation that had had to send four of its senior executives to Dublin only last week to negotiate who would contribute what to rescuing the FAI in the aftermath of the mismanagement that characterised his time in charge.

Delaney has not even been invited to attend meetings of Uefa’s Executive Committee through most of the year since his downfall at home and had not represented the European Federation at either the Women’s World Cup or the Under-17 European Championships, which were held in Ireland, despite him having held key roles in both the Women’s and Youth committees.

None of that was mentioned in the organisation’s statement announcing the news on Monday and there was no reference to the perilous state of the association he was forced out of last year. Instead, he receives fulsome praise for having played “a leading role in helping Uefa to achieve many things.”

He is specifically credited with contributing to the expansion of the European Championships to 24 teams and the introduction of centralised TV deals, both of which would have been key to his own hopes of maximising desperately needed revenue from Uefa to the FAI.

It had been thought that Uefa was biding its time in relation to Delaney, waiting for reports into events at the FAI to be published before moving to rid itself of him but the statement appears to be part of a deal aimed at securing a smooth exit now. It concludes with uefa wishing him well in the future. It was greeted with some anger amongst Irish supporters on social media.

The move appears to sever Delaney’s last remaining significant ties to the game. It remains unclear whether he might face disciplinary or other sanctions as a result of his actions during his decade and a half as chief executive of the FAI.