Minster for Transport, Tourism and Sport reiterated no danger to Euro 2020 games 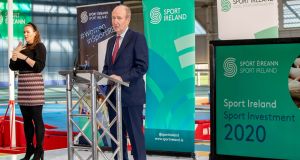 The Government’s hands are tied in respect of clearing out or reforming the council members of the Football Association of Ireland (FAI). Minister for Transport, Tourism and Sport Shane Ross, speaking at the announcement on Monday of Sports Ireland’s funding for National Governing Bodies and elite athletes for Tokyo 2020, said that it will be up to the FAI to sort out their councils.

Mr Ross added that a compromise deal is important if the FAI are to survive the current crisis but that the hosting of Euro 2020 games is not under threat from Uefa.

“We can’t do that,” said Mr Ross when asked if he was planning to reform the FAI council. “The Government are not in a position to do that. We made it absolutely clear that we don’t think that the very arrival of the independent directors would be a instant solution to the problem. There is a culture problem in the FAI.”

It was mentioned that John Earley, who resigned from the FAI board for a second time last month, is now back in some form after being appointed to a role on the new High Performance sub-committee.

Mr Ross also said that he expected stockbroker Roy Barrett, who was named as chairman of the association, to report back to the Government within a week with a set of proposals.

The Minister did not rule out the FAI bankers having to take a haircut in any financial package that might arise from Barrett’s consultations.

“He (Barrett) is going to come back and I guess he’s going to ask everybody to share some of the pain,” said Mr Ross.

“But that’s only an estimate. Those proposals should come, I should think within a week. We’ve had a series of meetings with unions, bankers, Roy Barrett and also Uefa. They haven’t come to an end. He has attended bi-laterals with others as well. He’ll have various proposals that he hopes will save Irish football.”

As one of 12 Uefa Euro 2020 successful bidding cities, Dublin was awarded three group games and one round 16 game at the Aviva Stadium. The matches take place in Dublin on June 15th, 19th, 24th and 30th. Mr Ross recently met with Uefa as part of the crisis talks.

“There was absolutely no question at that meeting anyway of them being abandoned, they were very anxious they would go ahead,” he said adding that there has been a significant shift in attitude.

“What we really agreed was we would look at the principle of us all contributing towards this. The great benefit of all the meetings was there was an incredible change in the mood music. And that was reflected in our subsequent meetings between ourselves and the bankers and Uefa, because once the independent directors were there, we recognised that there was a new situation and we wanted to be part of that solution rather than being at loggerheads.”