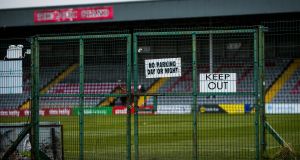 A view of Dalymount Park taken after the suspension of all Irish sport due to coronavirus. Photograph: Ryan Byrne/Inpho

Bohemians have admitted to disregarding the advice of the FAI by organising training sessions for small groups of their players at public facilities around the city over the past couple of weeks.

The club has claimed, however, that it sought to ensure that the players abided by Government regulations limiting the distance that could be travelled from home to five kilometres and group sizes to a maximum of four.

A video circulated on social media on Wednesday clearly shows more players than that on a pitch in Fr Collins Park in Donaghmede this week and Bohemians suggest this was the result of “an error” in that two groups of three were scheduled to be there at the same time but, it maintains, a distance of 20 metres was kept between the respective training groups “at all times”.

In a lengthy and detailed response to a query about the video, Bohemians say that they acted because some players were struggling with the ongoing challenge of following individual training programmes in isolation.

It says that on this basis, the club’s “first-team management team, in liaison with the first-team squad, board of directors and club Covid-19 health and safety officer established guidelines for our players to exercise in pods of three under the supervision of one coach per group”.

The guidelines are said to have included: separate travel to groups, handling of equipment by designated coaches only, players providing their own water bottles, social distancing and the use, before and after sessions, of hand sanitisers.

It acknowledges that sessions have taken place on separate days since May 18th.

“It was and remains the view of the board, the first-team management and players that exercising in a safe and socially-distant way in accordance with the Phase One (of the Government roadmap) guidelines was the best possible way of engaging our players, keeping their fitness levels up and enhancing their wellbeing in what has been a trying time for all.

“The club has continued to pay our first-team staff and player wages over the course of this crisis but the players themselves were becoming weary of training and exercising in complete isolation and wanted to feel part of a team and club again as much as is possible within the constraints of the Phase One guidelines.

“With that in mind, all stakeholders involved at the club agreed strict guidelines for such pods to exercise in a safe and socially-distant manner.”

The club acknowledged, however, that they had acted against the clear advice of the FAI’s chief medical advisor, Dr Alan Byrne, who had recommended that clubs not recommence training, even with groups of players that fell within the Government limit of four people.

“While we respect Dr Byrne’s advice, expertise and professionalism absolutely,” the statement says, “the club made the collective decision to operate under the guidance of the government Roadmap and Department of Health guidelines.”

Bohemians, along with Dundalk, Shamrock Rovers and Derry City had been due to resume training on Monday as part of an FAI-backed “pilot programme” which involves the regular testing of players for coronavirus, something that began last week and is being paid for by the association.

The intention is to hold a four-team tournament next month aimed at helping the four clubs prepare for their European games although the dates have not been confirmed because of the ongoing uncertainty surrounding the scheduling of the Uefa competition qualifying rounds.