Liverpool could seal title win at Anfield against Crystal Palace 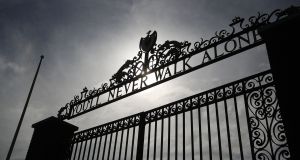 Anfield: Jürgen Klopp’s team require a maximum six points to win the league and their second game of the restart is at home to Crystal Palace. Photograph: Martin Rickett/PA

The English Premier League has confirmed Liverpool could win the title at Anfield despite police calls for any game that can seal the club’s first championship in 30 years to be switched to a neutral venue.

Jürgen Klopp’s team require a maximum six points to win the league and their second game of the restart, against Crystal Palace, will be at Anfield following confirmation of the first three rounds of fixtures by the Premier League on Friday.

Liverpool’s scheduled away matches against Everton and Manchester City, however, are the only fixtures in the league up until July 2nd that could be staged at neutral venues.

Mark Roberts, the UK’s national soccer police chief, had proposed moving six so-called “high-risk” matches to neutral venues amid concerns over demands on police during the coronavirus pandemic and fans gathering outside stadiums.

One of the games identified, Manchester United v Sheffield United, will be at Old Trafford on Wednesday, June 24th according to the list released by the Premier League. Another, according to national police on May 29th, was “the game in which Liverpool could secure the league title”.

Two London derbies that could also have been switched to neutral venues, Tottenham v West Ham and West Ham v Chelsea, are scheduled for the Tottenham Hotspur Stadium on June 23rd and the London Stadium on July 1st respectively.

All remaining 92 Premier League matches will be broadcast live in the UK by Sky, BT Sport, Amazon Prime and BBC with Radio 5 Live and TalkSport providing live commentaries on every game.

The opening game of the restart is Aston Villa v Sheffield United at 6pm on June 17th, with Manchester City hosting Arsenal at 8.15pm that day. Both matches were postponed because of Villa and City reaching the League Cup final.

Should City lose at home to Arsenal then Liverpool could win the title against Everton on Sunday, June 21st. That game kicks off at 7pm and will be free-to-air on Sky Pick, but where it will be played has yet to be decided.

Everton want to host the derby and Merseyside police have stated they have no objections to policing any matches in Liverpool during the pandemic. A decision is expected following a meeting of the local safety advisory group on Monday.

Liverpool’s next opportunity to win the league, should they win the derby but Pep Guardiola’s team beat Arsenal and then Burnley, would come against Palace at Anfield on Wednesday, June 24th. The league leaders are also opposed to the neutral venue idea.

In a statement released after the fixture announcement, Liverpool said they had “engaged with partners from Liverpool City Council, Merseyside Police, Spirit of Shankly, Everton Football Club and Blue Union in positive discussions and are all committed to working together to restart the season safely.

“As with normal match-day arrangements, all key partners are committed to creating a comprehensive joined-up plan in line with government and public health advice which prioritises the safety and wellbeing of the local community, supporters, staff, players and the professional support services who are vital to the success of behind-closed-doors match-day operations.

“Our aim is to ensure these games are completed with the least risk to public health and without adding further strain on the NHS and other public services. Further dialogue is scheduled next week between all partners involved.”

BT Sport will show the first Saturday 3pm Premier League match to be broadcast live in the UK when Brighton host Arsenal on June 20th. Norwich v Southampton on Friday, June 19th will be the first free-to-air game and broadcast by Sky. BT confirmed on Friday it would give viewers the option of watching the matches with crowd noise.

Richard Masters, the league’s chief executive, said: “We know it won’t be the same without our loyal supporters in stadiums but, together with our broadcast partners, we are able to ensure fans can watch or listen to each match live from home. It is important that as many people as possible can access our games so we are extremely happy that more than a third of our remaining fixtures will be televised free-to-air here in the UK.”

The dates and channels for the FA Cup quarter-finals have also been confirmed. Norwich will host Manchester United at 5.30pm on Saturday, June 27th on the BBC, with the remaining three ties on the Sunday. Sheffield United v Arsenal is a 1pm kick-off on BT Sport, followed by Leicester against Chelsea at 4pm on the same channel. The round concludes with Newcastle v Manchester City at 6.30pm on the BBC. – Guardian