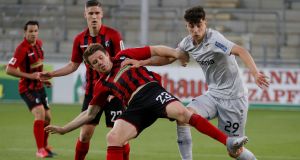 Chelsea have contacted Bayer Leverkusen about signing Kai Havertz this summer and hope to field the Germany winger alongside Timo Werner, who has agreed to join from RB Leipzig.

Havertz, rated as one of the best young players in the Bundesliga, is being pursued by several top clubs and Chelsea are expected to face intense competition from Bayern Munich, Manchester United and Real Madrid.

Frank Lampard is keen to reshape his forward line and he wants to add the 20-year-old, even though Chelsea are close to a £53 million (€61.7m) deal for Werner and have signed Hakim Ziyech for £37 million (€43m) from Ajax.

Chelsea know there is ground to make up on Liverpool and Manchester City after going two windows without signings and have seen an opportunity to make decisive early moves while rivals are deciding how much to spend following the disruption caused by the coronavirus pandemic. It could be a cautious market this summer and if Bayern, United and Real delay over Havertz, the path could be clear for Lampard to move in.

Arranging a deal for Havertz is unlikely to be easy, with reports in Germany suggesting Leverkusen could hold out for as much as €100 million for a player who has scored five goals in four games since the Bundesliga resumed last month. Chelsea, who are also interested in the Leicester left-back Ben Chilwell, have held early talks with Leverkusen and would hope to negotiate a fee in the region of £70 million (€81.5m).

Lampard has complained about his side’s lack of ruthlessness this season. He was heavily involved in the pursuit of Werner, whose £53m release clause expires next week, and has seen Chelsea struggle in the creative department since selling Eden Hazard to Real Madrid for £105m last summer. With Pedro set to join Roma on a free and Willian yet to extend a deal that runs out on June 30th, Lampard will have room in the wide areas. Havertz, who made his Leverkusen debut at the age of 17, would offer an injection of youthful quality.

Chelsea, whose shortlist also includes the Brentford winger Saïd Benrahma, will need to sell players to enable a heavy spend on Werner, Ziyech, Chiwell and Havertz. Although it is understood Leicester are open to selling Chilwell, they will not let the England left-back leave on the cheap. Chelsea will need to trim their squad, with uncertainty over the futures of Emerson Palmieri, Michy Batshuayi, Jorginho, Ross Barkley and Marcos Alonso. - Guardian