Eamon Zayed: Too many times racist incidents brushed under the carpet

Greater awareness of how colour, race and racism impact on people needed 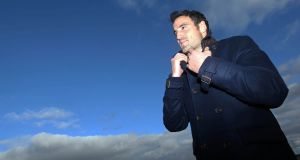 Eamon Zayed: ‘There needs to be a far greater awareness of how colour, race and racism impact on people.’ Photograph: Donall Farmer/Inpho

It is just about 20 years now since I was suspended from school in Dublin for telling the woman who worked in a nearby shop to f**k off. She had used a racial slur while telling me she didn’t want me in the shop.

My reaction in the circumstances seemed entirely appropriate but the school didn’t seem to agree. In fact, it didn’t even want to hear my side of the story and I found myself furloughed for a bit.

I’ve been wondering this past week or so, how would all of that play out for me now. How much have things changed?

These days, I live in the United States where I have been following current events closely and reflecting on everything that has been going on. Not for the first time, the issue of race is the hot topic in America and it would be nice to think that some substantial good will ultimately come of the appalling death of George Floyd and all that has followed. History, however, does not suggest we should be overly optimistic.

Early in my career, one of the most highly decorated players to ever play in the League of Ireland, called me 'a black bastard', more than once

It has been good to see that many Irish people are taking an interest in what has been happening; that some clearly feel passionately about the injustice at the heart of the story and the need for wide ranging, far reaching change but nobody should be under any illusions, there is much work still to be done at home too.

When I read about racially motivated incidents in Ireland, see the plight of those in direct provision and the tone of the debate about it, it leaves me as convinced than ever that we need education on the issue. There needs to be a far greater awareness of how colour, race and racism impact on people. Some more than others, of course.

As the son of a Tunisian father and an Irish mother, people clearly felt I stood out back in 2000 and there were quite a few who weren’t bashful about saying so.

A few incidents stand out in my memory, like the one a year on from the suspension that again involved a shop. On this occasion when I got to the door an older kid called me a ‘n***r’. That guy is a police officer now.

The experience that shaped my own outlook certainly didn’t start or end at the door of the school shop, though.

Growing up I always got called names . . . I heard them all. Even my friends used to think it was ‘banter’ to call me things. Fortunately, most of them educated themselves to the point where they came to understand that when it comes to race they don’t get to decide what I should think is funny.

Getting me to laugh along was never the aim of anyone who abused me on a football pitch but it happened often enough and it was rare, in my experience, that anybody in authority took the matter as seriously as I did at the time.

The issue we have is that many people don’t want to acknowledge, to understand, to educate themselves

During a game early in my career, one of the most highly decorated players to ever play in the League of Ireland, an ‘all-time great’ many might well argue, called me “a black bastard,” more than once. A week later, he was in involved in a campaign for Show Racism the Red Card.

My club at the time felt that it was better not to go public about it all; best not to kick up a fuss as he was such a high-profile player. It is a recurring theme with racism, of course, that those on the receiving end are too often obliged to stay silent rather than risk greater repercussions.

Much later, when I did make an official complaint against an opponent during one of my last seasons in the league, a disciplinary committee considered the incident and gave the player a three-game ban but for “offensive behaviour” rather than racism.

Throughout my time in the league there were also many incidents of racial slurs being directed towards me by fans of various opposition clubs. Not once, when I raised the issue, did a club accept it and hold their hands up for the greater good. NOT ONCE.

Instead, they would play it down or plead ‘the fifth’ and in some instances even question my honesty and integrity on the issue. How can you play down racism and just brush it under the carpet? It seems like that’s what we have been doing for generations.

In all the instances I mentioned here, and more, when I have spoken up I have faced a fight to be believed by those in authority; maybe because I didn’t have video evidence.

I’ve been away from the league now for a few years and I’d like to think that the few young players from different ethnic backgrounds establishing themselves in it now are having an entirely different experience. Once again, though, the history isn’t very encouraging.

Here in America now, people just view me as a white Irish guy. Back at home in Ireland, I’m still regarded as different because of the colour of my skin and people don’t much like different.

The issue we have is that many people don’t want to acknowledge, to understand, to educate themselves on all of this. Racism will only be solved when we do all of those things then work hard as a society to do better, to be better, to change.

Because Black Lives Matter but so too does the way that black people actually get to live their lives.

Eamon Zayed is a Dublin-born professional footballer who played for a number of Airtricity League sides as well as clubs in Norway, Iran and Malaysia before moving the United States. He has represented Libya at international level and is currently with Chattanooga Red Wolves in the USL.