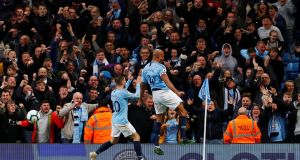 Perhaps Gary Neville put it best in his commentary duties from the television gantry: “Where do you want your statue, Vincent Kompany?” It was, without question, the goal-of-a-lifetime from the Manchester City captain and the rewards will be considerable if his team can extend their winning 13-game sequence by just one more match. It is simple now: a win at Brighton on Sunday and there will be nothing Liverpool, a point behind in second position, can do about it.

Kompany might not get a statue – not yet, anyway – but another championship winner’s medal will make up for that, one imagines, and if his team can make sure the trophy remains in Manchester there can be no doubt how people will remember the defining moment of the title race.

There were 70 minutes on the clock when Kompany took possession of the ball and started loping forwards. Nobody in a Leicester shirt went to close him down because, well, it was Vincent Kompany. Yet they underestimated him. He took the ball into striking range and pulled back his right foot. It was a mix of desperation and inspiration, all in one. His shot was still rising as it flew past Kasper Schmeichel, struck with curve and spin so it was arcing away from the goalkeeper. And in that moment, amid all the euphoria and the restored sense that, yes, we were watching the champions-in-waiting, suddenly it did not seem to matter that Pep Guardiola’s players had seemed gripped by tension.

They certainly toyed with the emotions of their supporters. It was anything but straightforward for the reigning champions and, until Kompany decided to take matters into his own hands, it was straying dangerously close to becoming a tremendous ordeal. It still might have been but for Kelechi Iheanacho, their former player, squandering Leicester’s outstanding chance of the night, 87 minutes in.

Nerves? Perhaps the occasion did get to them a little. Their inability to impose themselves in the first half certainly left Guardiola looking jumpy. It is always possible to gauge how this team are playing judging by the manager’s behaviour. Here, the game had not even reached the 10-minute mark before he was frantically gesturing to his players, waving his arms in the manner of someone who patently did not like what he could see.

Guardiola was entitled to be concerned. As talented as Phil Foden is, Guardiola’s team are never quite the same proposition when they are missing Kevin De Bruyne. Fernandinho was also on the list of absentees and early on, when an onslaught might have been anticipated, it did not happen. The crowd was flat, twitchy, waiting for something to materialise. The players were flat, too, with the honourable exception of Bernardo Silva, who seemed utterly determined to lift everyone around him.

At one point Bernardo Silva turned up the volume with a lovely slaloming run through a clutch of Leicester defenders inside the penalty area. Yet, by half-time, there had been only one occasion when Schmeichel in the Leicester goal had been seriously called into action. Sergio Agüero’s header had struck the underside of the crossbar, direct from a corner, but could conceivably have spun over the goalline had it not been for Schmeichel, mid-air, clawing the ball away. A goal at that stage would have soothed the crowd’s anxiety. Yet the ball stayed out and, 40 miles or so away on Merseyside, the Liverpool supporters watching on television might have dared to think it could be their night.

It was certainly a difficult start for the team trying to defend their league title. Bernardo Silva was a constant menace but there was never really an occasion in the opening 45 minutes when he or Raheem Sterling, playing either side of Agüero, managed to get in behind the home defence. Leicester looked relatively comfortable and, though the home crowd occasionally took its frustration out on the officials, it would not have been out of the question for the referee, Mike Dean, to show David Silva, of all people, two yellow cards, rather than just one, in that period. Kompany escaped with a booking for a wild challenge on James Maddison but that, again, demonstrated how the home side were not playing with their usual control.

For that, the credit ought to go to Leicester. It was certainly a clever tactic for the away side to try to play the game at their own tempo. The players in the darker shade of blue were quite happy to knock the ball around in their own defence – similar, indeed, to the approach Guardiola’s team had taken when they played at Liverpool in October. It slowed down the game and stopped the home side from gaining any real momentum. If anything, it is a surprise more teams have not tried similar here this season.

Leicester also looked pretty useful on the break, meaning Kompany had to throw himself in the way of an early attempt from Ricardo Pereira, but there was no way the home side would be so passive after the break. Foden went off in the 56th minute, replaced by Leroy Sané, and that meant the team operating in a 4-2-4 formation. The full-backs, Kyle Walker and Oleksandr Zinchenko, both had the licence to roam forward and, gradually, it became the kind of match that might have been expected earlier on: one side doing virtually all the attacking, the other pinned back.

Even then, Leicester still had promising moments on the counterattack, most notably with Maddison. Schmeichel saved again from Aguero but then the ball was at Kompany’s feet and, in that moment, all the tension was released.