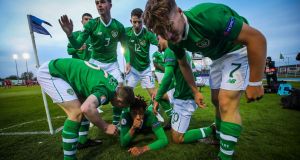 Andrew Omobamidele’s late equaliser against Czech Republic kept Ireland in contention to the reach the knockout stages of the Euro Under-17 finals heading into Thursday’s final day.

The Norwich City defender arrived at the back post with two minutes left to half-volley in an inswinging corner from James Furlong.

Substitute Václav Sejk had silenced most of the 2,613 inside the Waterford Regional Sports Centre by drilling home the breakthrough goal with his first touch after coming on.

Ireland’s draw, their second of the tournament, means they must beat Belgium on Thursday at Tallaght Stadium to be sure of securing a quarter-final spot on Sunday. A draw would suffice if Greece beat the Czechs in the other match being played simultaneously. Ireland could also clinch a top-two place if they record a higher score draw than the Czechs and Greece.

The euphoria of nicking a late leveller was tainted slightly by the dismissal of Festy Ebosele in stoppage time.

His aerial challenge on Jan Hellebrand prompted Slovenian referee Rade Obrenovic to issue a second yellow card. Ebosele’s reaction, kicking a clatter of water bottles and throwing his jersey into the crowd, is unlikely to do him much favours inside the FAI and Uefa corridors of power.

Ireland were bright from the off. Starting with goalkeeper Gavin Bazunu rolling the ball out to Anselmo MacNulty on six minutes, the Real Betis defender strode out of defence before picking out Conor Carty rampaging clear. Perhaps wisely, the Wolves striker used the space afforded to steady himself before shooting but blazed his effort from the edge of the box over the crossbar.

Ebosele then popped up at the back post to connect with James Furlong’s left-wing delivery. Unfortunately, despite having the right idea of directing his header back to way it came, the Derby winger’s accuracy was marginally askew.

Devoid as an attacking force, the Czechs eventually came alive the final third.

It was hardly surprising that a team denied their first win on Friday by a stoppage-time Belgian equaliser would carry some artillery up front.

Their sole striker Adam Toula was first to give Ireland’s defence to slip, only to slice his shot wide before right-back Josef Koželuh advanced at pace to crack a rasping drive a yard off-target. As the interval approached, Toula squared for David Pech to have a stab from 10 yards but he whistled his shot past Bazunu’s first post.

A scrappy start to the second half was punctuated only by the concession of Ireland’s opener just past the hour. Their failure to clear a right-wing cross was punished clinically by Sejk who volleyed home from eight yards.

That put the onus on O’Brien’s side to display some creativity but it took a corner, identical to the first game, for their goal to materialise. Omobamidele read it perfectly, losing his marker and applying a touch which keeps Ireland in the mix.