Defeat would see Liverpool ‘fail in the most beautiful way’

Jürgen Klopp still believes a comeback is possible at Anfield 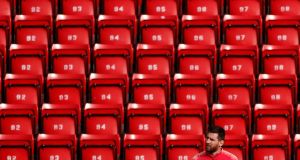 Jürgen Klopp was occupied with keeping the Premier League title race alive in between Champions League dates with Barcelona yet found time for a history lesson with Liverpool’s players ahead of the formidable task that awaits on Tuesday night. It concerned the art of recovering from a 3-0 defeat against Spanish opposition and the willingness, should another feat of Anfield escapology prove beyond them, to “fail in the most beautiful way”.

Klopp has savoured a European comeback as Liverpool manager before when his new team were twice left needing three goals to overcome his old one, Borussia Dortmund, in the 2016 Europa League quarter-finals. They delivered on that raucous night at Anfield, but without the concussed Mohamed Salah and injured Roberto Firmino, and against Lionel Messi and Luis Suárez, it would eclipse anything the stadium has witnessed in European competition to preserve Klopp’s record of never having lost a Uefa knockout tie as the Liverpool manager. His own past provides a glimmer of hope.

“I don’t think too much about Dortmund,” Klopp admitted ahead of the semi-final second leg. “My own personal little story is about Real Madrid, five years ago with Dortmund. We lost 3-0 there [in a Champions League quarter-final] but then at home we changed seven or eight positions and won 2-0 and we should have won 5-0 without a shadow of a doubt.

“But it was Madrid then, and it’s Barcelona now. It’s a big difference. I don’t want to talk too much, but I have told the players that story. It doesn’t mean that it will happen again, but it is enough for me to believe.”

Klopp said in the immediate aftermath of that quarter-final second leg: “You could make a video of this game and show it to the teams that lose a first leg 3-0.”

He hinted at following his own advice for the return with Barcelona, and catching out the Spanish champions with a change in formation and a selection surprise such as Xherdan Shaqiri or Rhian Brewster.

“We changed the team on purpose,” he added of the Dortmund-Real tie. “Oliver Kirch had only played a couple of games and everyone was thinking ‘who’s that guy?’ But he played an unbelievable game that night against Madrid.

“A lot of things are possible. It’s about how much. Can we believe at the beginning in the opportunity? Then we have to do the right things on the pitch, and then you need a bit of luck, which we didn’t have in Barcelona. Then we need a fantastic atmosphere.

“We have two of the best strikers in the world not involved, so of course we need the crowd involved. Some things will be new, 100 per cent, with not really any time to train. That’s how it is, but I am still looking forward to it. It’s the Champions League, and you want to be a part of it. We were so happy when we came through the quarter-final. Now we are in the semi and we have to use the second leg.”

While Ernesto Valverde was resting every Barcelona player who started the first leg from Saturday’s 2-0 defeat by Celta Vigo, Klopp was losing Salah to a head injury sustained in the late win at Newcastle. Tuesday will be the first time he has been without both Salah and Firmino for a Champions League or Premier League game.

Brewster, a highly rated 19-year-old who has not made his first-team debut yet and has been sidelined for 14 months by ankle and knee surgery, will feature in some capacity.

“It’s guaranteed,” said Klopp. “He’s ready. Rhian has now arrived with us after being heavily injured. Day by day he has got better, and he has been in outstanding shape for the last three or four weeks, but the other players were there as well. Next season he will be playing 100 per cent and he knows that. I have told him already. Now it’s really nice, in a difficult situation, that we can give him that spot in the squad and have him there to bring on as a striker. When you’re on the bench you are an option to play.”

Klopp was encouraged by Liverpool’s bravery in Barcelona, and the quality of chances created, if not taken. His team’s predicament means there has been no request to Ulla, Klopp’s wife, to prepare a party for after Tuesday’s semi-final but the occasion remains one to cherish.

The Liverpool manager explained: “We want to celebrate the Champions League campaign, either with a proper finish or another goal. That is the plan: just try. If we can do it, wonderful. If not, then fail in the most beautiful way.

“They are halfway through, that’s the absolute truth, but as long as it’s not decided that is the competition. I don’t tell my missus ‘wait for me at home, we will have a party after the game because we’ll win it’.

“We have to work for it. We believe in the chance, we believe in the opportunity, not in the result. There are a lot of other components that are important as well. We have to change again obviously, and we will see how we deal with that. In general the shape is good and the confidence is there, so we should try it.”