Pochettino inspired by marathon shootout during his playing days

Manager draws inspiration from win in his Newell’s playing days 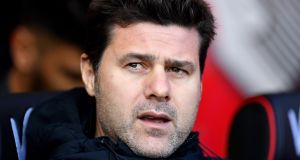 Tottenham manager Mauricio Pochettino goes to Amsterdam with his team wobbling – they have lost nine of 15 matches in all competitions. Photograph: Justin Setterfield/Getty Images

Mauricio Pochettino picks up the story on the night before the 1992 Copa Libertadores semi-final, second-leg. The Tottenham manager was 20 years old and his Newell’s Old Boys team had travelled to Colombia to face América de Cali. The first leg in Argentina had finished 1-1 and Newell’s were the underdogs. It would prove to be an unforgettable occasion, steeped in the wildest drama, when Pochettino’s faith was tested as never before.

Cristo Rey stands on top of the Cerro de los Cristales to the west of Cali, overlooking the city. It is a massive statue of Christ – similar to the one in Rio de Janeiro – and Pochettino remembers seeing it during the pre-match training session. Newell’s practised their penalties and Pochettino thought that if a shootout were to be required, he would be ready. That is not quite how it went. The second leg did go to penalties, after another 1-1 draw, and Pochettino stepped forward to take the first kick of the second round of sudden death. Everybody had scored so far but Pochettino bucked the trend, ballooning his effort high over the crossbar.

“I put the ball up there at the Cristo,” Pochettino says. “I’d seen it the night before on the hill behind the ground, arms outstretched. And I said, ‘Oh, if tomorrow I will shoot a penalty . . . ’ It was unbelievable. It was the same goal that we’d practised our penalties.”

The Cali fans inside the Pascual Guerrero stadium took leave of their senses. It had been a ferocious game, featuring a red card for either team on the hour, but now Cali were one kick from glory. Up stepped Jorge Bermúdez to win it only for the Newell’s goalkeeper, Norberto Scoponi, to make a stunning save. Scoponi is now the assistant manager with Mexico, working under Gerardo “Tata” Martino, another Newell’s old boy, who played that night. Pochettino owes him a debt.

The shootout thundered on, with Cali blowing another kick to win it in the next round. Each goalkeeper stepped up to score before – in the eighth round of sudden death and 13th in total – Newell’s scored and Cali did not. It remains the longest shootout in Libertadores history.

Pochettino smiles. It was a stunning triumph against the odds and one which gives him heart as Spurs prepare for the second leg of their Champions League semi-final against Ajax on Wednesday. Once again, Pochettino will be the underdog, his team having lost the first leg 1-0 at home. But he knows that anything is possible if the mentality is correct.

“No one believed in us – Cali were the favourites, it was all prepared for them,” Pochettino says, mindful that Newell’s had reached only one previous Libertadores final to Cali’s three. “But it’s possible if you play bravely and with a winning mentality. I remember that semi-final because we were so brave, although we parked the bus after we scored early and tried to play counterattack. We defended all the time and they equalised in the 89th minute. But yes, it was an amazing game.”

In Cali, Pochettino headed Newell’s into a fourth-minute lead and he will stress the importance of a fast start against Ajax, after Spurs made a false one to the first-leg. They chased shadows for the opening 30 minutes or so and were fortunate to concede only once to Donny van de Beek.

The atmosphere stands to be hostile in Amsterdam but one thing is clear – it will not be Cali. When Pochettino reflects on his major away-day adventures in South America, it seems to come as standard that the windows on the Newell’s team bus were stoned and smashed by rival fans. It happened in Cali and that was merely the start. The stadium featured a retractable tunnel that stretched, out of necessity, almost to the centre circle in order to protect the visiting players from missiles but something went wrong and Pochettino’s teammate, Eduardo Berizzo, was hit in the head by a missile.

“Arriving at the stadium was unbelievable because it was like a jungle where you cannot see the threat, the stones,” Pochettino says. “Then, there was this big, plastic tunnel for when you walk out and it went nearly to the middle of the pitch. Berizzo received a battery on his head and it cut him.” Berizzo, who is now the Paraguay manager, needed medical attention and the kick-off was delayed. “We had to wait, go inside and get him stitched before playing a semi-final. Here, you feel the pressure but in South America, it touches you.”

In the first leg against Ajax, the Spurs defender Jan Vertonghen also suffered a head injury, albeit after a different kind of aerial collision. “Maybe it’s a sign,” Pochettino says, with a smile. “But that was Jan’s nose.”

Newell’s would lose the final to the São Paulo team of Rai and Cafu and it was another epic. A crowd of 105,000 watched the second leg in Brazil, with São Paulo winning 3-2 on penalties. Shortly afterwards, the Newell’s manager, Marcelo Bielsa, who is now at Leeds, resigned. He was exhausted. The era over.

Pochettino goes to Amsterdam with his team wobbling – they have lost nine of 15 matches in all competitions. Mental and physical fatigue has become an enemy and Pochettino has found his faith tested. He continues to believe.