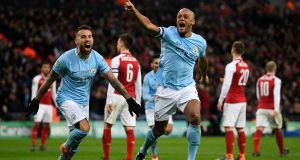 At the final whistle, Pep Guardiola carried the air of a man who was perfectly accustomed to these kind of occasions. He embraced his staff, he clasped the hand of the losing manager, Arsène Wenger, and then he made his way on to the pitch to congratulate the players who had delivered him the first trophy of his Manchester City years.

The first of many, one assumes, even if Wigan Athletic have shown that too much time was spent debating whether Guardiola’s team could win the lot this season. A treble is still on, however, and a second trophy is guaranteed given the way they have turned this season’s Premier League into a procession. Guardiola’s team will need to play better than they did here if they are to add their name to the list of Champions League winners. Yet it was still another occasion to think the Abu Dhabi masterplan – target: worldwide domination – is gradually coming together.

In the process, there was another reminder for Arsenal here about how far they have fallen behind the elite. Wenger has still not won the League Cup during 21 years as a manager in England and Arsenal now have the unwanted record of losing six finals in this competition. Nothing, though, will be more galling for Arsenal than the realisation that it was they who used to dismantle teams this way. They looked what they are: a team 27 points short of City in the Premier League, with urgent work needed to improve the team and a manager whose peak years can feel a long time ago.

As superior as they were, there is even a legitimate argument that City did not reach their more exhilarating peaks. Kevin De Bruyne can pass more imperiously than he did here. David Silva was eight out of 10 when frequently it is nine. Fernandinho had to go off in the second half with an injury and, no kidding, there were even rumours that De Bruyne had played one pass out for an Arsenal throw-in. Blink, and you might have missed it.

Ultimately, though, City did not have to be at their absolute best to win by some distance and there were Arsenal supporters heading for the exits from the moment when Silva spun away from the substitute Sead Kolasinic to drive in the third goal. Sergio Agüero’s 30th goal of the season had given City an 18th-minute lead, after some wretched defending by Shkodran Mustafi, and there was never any doubt that it would be Vincent Kompany lifting the trophy once he had stabbed in the second goal shortly before the hour. Kompany was the outstanding performer, barely giving Pierre-Emerick Aubameyang a sniff, and it is just a shame his career has been so undermined by injuries. On the big occasions, what a player he can be when the legs are working and he is feeling good.

In the end, it was almost a surprise that City did not add more and the ironic “oles” from the Arsenal supporters after one brief spell of keep-ball, at 3-0 down, probably sum up the disaffection from that end of the stadium. Wenger has heard worse in recent years but his team are 10 points adrift of the Premier League’s top four and their only realistic hope now to save their season comes via the Europa League, a competition they used to regard with haughty disdain.

At least Jack Wilshere played with the spirit of a man who found the idea of meek defeat to be abhorrent. There were others, however, in red and white who spent the entire game on the edges. Mesut Özil had one of his wishy-washy games. Aaron Ramsey was also strangely subdued and, defensively, Wenger’s decision to revert to a back three simply did not work. Nacho Monreal injured himself with a woefully mistimed challenged on Kyle Walker, and, at this level, it has been clear for some time that Calum Chambers is simply not up to it.

The irony is that when Aguero ran clear to clip in the opening goal it was possibly the most unorthodox goal ever scored by a Guardiola team – originating from nothing more refined than a long punt over the top from their goalkeeper, Claudio Bravo. Perhaps Guardiola had been watching old television replays of Wimbledon from the 1980s. Except, of course, centre-halves knew how to defend in those days. Mustafi had committed the centre-half’s sin of getting the wrong side of Agüero and all it needed was the slightest of nudges from Agüero to take him out of the equation. Agüero was just too good for him, too alert and much too clever, and once the striker had got away it was a beautifully measured lob to lift the ball over the oncoming David Ospina and into the net.

City’s second goal came from a corner on the right. Ilkay Gundogan had the first attempt after De Bruyne had picked him out, 20 yards from goal, and Kompany jutted out his boot to divert the shot into the opposite corner from the way the ball was heading.

Yet perhaps it was the third goal that said the most about this City team. Danilo’s brilliantly disguised through ball for Silva later was a pass that De Bruyne would have been proud of. That was City’s left-back with the killer pass and that, more than anything, summed up the group of players with the silver. – Guardian service