Liverpool in the goals again as they brush aside West Ham

Mohamed Salah netted again at Anfield while Can, Firmino and Mane also netted 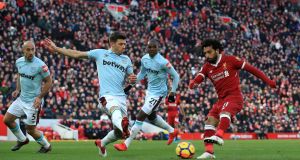 Liverpool took their goal tally for the season to 103 as they claimed second place in the Premier League with a comfortable 4-1 win over West Ham.

Mohamed Salah, with his 31st of the season, again got on the scoresheet, while Emre Can, Roberto Firmino and Sadio Mane also struck.

West Ham hit the bar through Marko Arnautovic in the early stages, but were outplayed and managed just a consolation through substitute Michail Antonio.

Liverpool, who also won 4-1 at the London Stadium in November, were dominant and could have had more for their efforts, with both Salah and Mane striking the woodwork.

The Hammers, whose supporters wore T-shirts commemorating the 25th anniversary of Bobby Moore’s death, offered little and the result prolonged their manager David Moyes’ miserable record at Anfield. The former Everton and Manchester United boss has now not won at the ground in 15 attempts.

It also proved an ineffective Hammers debut for Patrice Evra, with the former United defender booed throughout.

The game got off to a lively start, with both sides hitting the woodwork in the opening minutes.

Salah looked certain to open the scoring with just two minutes gone after being teed up by Firmino, but Adrian touched his low shot on to the post.

West Ham initially responded positively with Arnautovic breaking clear of Virgil van Dijk and attempting to beat Loris Karius with a delicate chip. His effort was almost perfect, but the Liverpool keeper just managed to brush the ball with an outstretched arm to push it on to the bar.

The Hammers failed to build on that moment of near-brilliance and Liverpool soon assumed control.

Adrian had to be alert as a cross from Andrew Robertson threatened to drift into the top corner and the Spaniard then saved from distance from Trent Alexander-Arnold.

Liverpool’s breakthrough came just before the half-hour as Salah delivered the cross for Can to head home from a corner.

It was a goal the hosts deserved and Salah should have doubled the lead before the interval when he headed a Robertson cross over from close range.

The Egyptian quickly made amends for that miss after the restart, continuing his prolific season by turning a low shot past Adrian after a tenacious run by Alex Oxlade-Chamberlain.

Liverpool looked to press home their advantage and Mane had a shot blocked by Adrian before Firmino added the third. The Brazilian was played in by Can after Joao Mario lost possession and he calmly took the ball past Adrian before slotting in.

Moyes made a change by sending on Antonio and that paid immediate dividends as he scored within moments of coming on, taking a touch before slotting past Karius on a quick counter-attack.

But Liverpool regrouped and Adrian was in action again as he saved from Salah, Firmino and Mane in quick succession.

Mane was then denied again, this time by a post, after being played in by Firmino, but made no mistake when the Brazilian crossed moments later, completing victory by lifting over Adrian from close range.