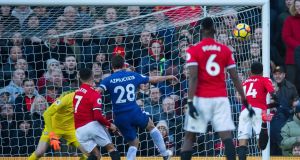 Jesse Lingard caused Old Trafford to reverberate with noise following a 76th-minute header that grabbed a win that took Manchester United back into second place ahead of Liverpool.

The creator was Romelu Lukaku, his neat cross finding the substitute, after the No 9’s first strike for United against top-six opposition had equalised Willian’s opener.

The victory means Chelsea remain fifth and United are now six points clear of the west London club in the race to secure a Champions League berth.

After José Mourinho (perhaps studiously) failed to namecheck Antonio Conte in the programme there was a pre-match handshake between the feuding pair and they were later seen sharing a smile. The United manager made two changes, Anthony Martial replaced Juan Mata and Paul Pogba was reinstated for the injured Ander Herrera, the Frenchman having been dropped for the draw at Sevilla. Conte stood down Pedro for Álvaro Morata and Cesc Fàbregas for Danny Drinkwater.

It was the latter who prompted Chelsea’s opening foray with a sweeping ball that won a corner. It came to nothing yet when the visitors next attacked David De Gea was beaten.

Fortunately for United the goalkeeper’s bar was not as a fluid move that had Eden Hazard finding Marcos Alonso on the left ended when Morata volleyed the ball off the woodwork from the Spaniard’s first-time delivery.

From here United gained a foothold. Anthony Martial, Lukaku, Alexis Sánchez and Nemanja Matic all began to see the ball. When Sánchez floated a diagonal free-kick in, though, this went straight into Thibaut Courtois’s hands.

Pogba’s opening contribution was to find Antonio Valencia along the right and after he crossed Sánchez might have done better with Lukaku’s chest down.

The early exchanges were open. Chelsea utilised wide areas to create space, with Victor Moses probing near United’s goal on the right.

United emerged from the ensuing lull on top. Lukaku twice received the ball in a threatening position but first touch, then space, constricted potency. Sánchez was guilty of a lack of the latter when arriving late for a Martial pass. The Chilean had only to stab home either side of Thibaut Courtois, instead he dribbled the ball straight to the No 1.

Pogba’s best moment of the half drew a yellow card for N’Golo Kanté. Yet after his barracking run caused the midfielder to foul him, disaster for Pogba and delight for Chelsea followed.

Valencia dinked a cross in and Willian headed clear. Yet after Pogba failed to challenge, the ball went again to the Brazilian and he found Hazard. After galloping alongside in the inside right channel, possession came back to him via a delightful return pass from the Belgian. Now, Willian took a touch and smashed home past De Gea, who should have done better, the ball passing near enough to his body for it to be repelled.

The Spaniard was soon to see a fine equaliser, though. This was intricate, impressive stuff. Matic found Sánchez whose precise ball hit Martial’s feet and when his as exact pass went to Lukaku, the Belgian registered a 22nd United goal.

This meant United began the second half in classic Mourinho stick-or-twist territory. Despite being the home side and proud progenitors of attack-first football this is just not the Portuguese’s default mode.

His team, though, did to go for the win. Pogba threaded a ball forward, Sánchez collected on the area’s edge and the home crowd responded noisily. Next zipped passes between Matic, Pogba and Sánchez moved United forward at a rare speed. The attack eventually led to a corner from which Sánchez committed the cardinal sin of hitting the first defender.

De Gea atoned a little for his earlier error by saving a Drinkwater shot that came dipping in the mid-afternoon sun, in what was a warning to the home side.

For the last 25 minutes Mourinho introduced Lingard for Martial. His first contribution was to dispossess Willian and launch a United attack.

They were finishing the stronger. Scott McTominay outmuscled Hazard and Chelsea were spun out of position. When the ball eventually came to Sánchez his pivot-cross was hammered instantly at Courtois by Lukaku.

Now came Lingard’s fine header, a finish that is not his first match-winner this term for United. It may be a most precious, though. – Guardian service

1 Betting shops face uncertain future as they prepare for Monday reopening
2 Tianna Bartoletta: ‘After you’ve gotten your medal, you become black in America again’
3 Timo Werner giving up on Liverpool dream on path to being truly wanted
4 Mature Ringrose keeping the ups and downs of rugby life in perspective
5 Djokovic criticises ‘extreme’ safety protocols proposed for US Open
Real news has value SUBSCRIBE