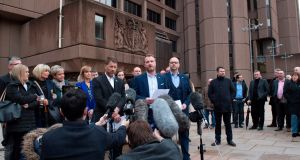 The former football coach Barry Bennell was branded a “monster” by one of his victims in court as he was sentenced to 31 years. The court was told that Bennell will serve half his sentence in custody with the rest on licence, with an additional licence period of one year.

The catalogue of sexual abuse revealed during his trial has prompted another 86 people to make complaints against the former Manchester City and Crewe Alexandra youth team coach.

Sentencing Bennell, the judge Clement Goldstone said he was “sheer evil”. He said: “To those boys you appeared as a god . . . in reality you were the devil incarnate. You stole their childhood and their innocence to satisfy your own perversions.”

Victims cried “yes” as the verdict was read out after the judge said that Bennell had left a “trail of psychological devastation”.

Bennell, described by the prosecution at Liverpool crown court as “industrial-scale child molester” and a “predatory and determined paedophile”, watched from the dock as players he had raped and molested as children, now in their 40s and 50s, read out impact statements detailing how his crimes had affected their lives.

Bennell had never previously been brought in front of his victims, having appeared via video-link during his five-week trial.

Victims in court included Gary Cliffe, Steve Walters, Micky Fallon, Chris Unsworth and Andy Woodward. The brother of Mark Hazeldine, who took his life after being abused by Bennell, was also in court.

Bennell appeared in the dock wearing a light-blue sweatshirt, grey jogging bottoms and black trainers. For the most part his head was bowed and there were only a few moments when he raised his eyes to look at the players who were detailing their childhood horrors.

At one point Cliffe, a former Manchester City junior who was abused hundreds of times, including on the pitch at Maine Road, approached the dock in an attempt to force Bennell into eye contact. “Why?” Cliffe asked before taking his seat again.

The victims told the court they had suffered from depression, anxiety, panic attacks, flashbacks and nightmares. Some were diagnosed with PTSD and had had relationship issues; others had turned to drink and drugs and been suicidal.

Bennell, 64, has previously served two other prison sentences in England, as well as one in the US, and was found guilty last week of 50 offences relating to 12 junior players, aged eight to 14, between 1979 and 1990.

Bennell, who had a seven-year association with Manchester City and worked for Crewe for roughly the same amount of time, had admitted seven charges and the jury found him guilty of the other 43 offences.

One victim told the court: “I did not want it, did not ask for it and did not enjoy it. I was a child, and between the ages of 10 to 13 that monster decided it was fun for him to use me as a sex toy, someone that he could get his kicks from. He took my innocence, my virginity and my football career. He preyed on his victims, groomed us while grooming our parents.

“People may wonder why I never told my parents but after the pain and suffering, but more importantly the guilt, they have felt over the past 12 months I can now see why. My dad finds it very difficult to think that that he was taking me to play football, and become the footballer that I always wanted to be, when for three years he was taking me to me hell.”

Another former player said: “Even though it’s over it’s not over because it will always be in my head. No one should have to go through what that man put us through.”

Eleanor Laws, defending Bennell, said her client had twice had cancer and needed operations to remove tumours from his tongue. He was now in remission but the subject of an “onerous” feeding regime that meant he had to be fed via a tube eight times a day.

To audible disquiet from the public gallery, she added that he was also on heavy painkillers and anti-anxiety medication and had undertaken a “number of treatment programmes” during his previous prison sentences. – Guardian service