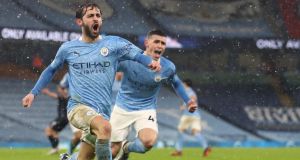 This was a breathless affair for which an abacus was needed to keep count of the endless chances created. Manchester City created most of these in a blur of activity close to Emiliano Martínez’s goal and when Aston Villa were finally breached on 79 minutes it was deserved.

Tyrone Mings dallied, Rodri mugged him, the effervescent Bernardo Silva received the ball, swerved away from a clutch of defenders, then fired in a memorable strike.

This brought jubilation for City and anger for Villa as the visitors complained Rodri had come from an offside position. Dean Smith’s ire was enough to have him sent off by Jonathan Moss, the referee not impressed by the manager’s vociferous complaints. Yet with Ilkay Gundogan adding a late penalty, at the final whistle the bottom line was that City had moved onto 38 points, as their fine form continued.

An all-day downpour made the surface slick and from kick-off Kevin De Bruyne soon had the visitors careering about their penalty area. First was a dipping free-kick Jack Grealish headed out for a corner. The Belgian hit this in from the right, Rodri headed to Silva, his shot was saved well by Martinez, and Mings flung himself into a melee of players to clear.

City’s recent upsurge in form has returned the familiar sight of their opponent being under siege. So it was that Villa were bombarded – Ben Foden next to go close to breaching them via a mesmeric dribble that had him gliding beyond two defenders before being stopped.

The youngster’s next act was to feed João Cancelo along his channel and the left back’s chip was aimed for Silva but missed. In a smorgasbord of chances Raheem Sterling was next to show, the No 7 darting down the right and firing in a cross that, again, yielding nothing.

Villa’s sole attack was a breakaway in which Ross Barkley failed to find Grealish in space. The artistry of Villa’s captain was surely their best hope against the constant blue wave. Another illustration came when Grealish’s cute reverse pass put Bertrand Traoré in near to Ederson but the shot was wild.

Now came disruption for City as Kyle Walker was forced off for what appeared a dead leg, Oleksandr Zinchenko replacing him. There was no break to the home side’s rhythm, though. Foden fed Gundogan along the left, he pulled back to De Bruyne and a fierce effort hit Mings. Next a Sterling-Cancelo one-two along the opposite flank had the latter’s cross this time cleared by Matt Targett. Then a Rodri 20-yard pot-shot was blocked – inadvertently – by Sterling as the ball headed for goal.

City failing to finish copious chances is a theme of this season. And they nearly paid when Barkley sent a curler skimming across the sodden turf but Ederson’s hands were trustworthy.

As the interval neared Villa looked to have stymied City’s percussive flow only for a final warning. A corner taken by Traoré became a De Bruyne breakaway in which Foden was fed and saw his piledriver blocked by Matthew Cash. This drew groans from the City substitutes sitting nearby: for the spurned opportunity and all those that had come before.

Guardiola had Gabriel Jesus on the bench yet despite the lack of killer touch before goal he remained there as the second half began. When Sterling and Foden each zipped in crosses a dedicated No 9 like Jesus would surely have been there to turn home. Instead with a floating player in the position – one of Sterling or De Bruyne – Villa escaped once more.

While City did the same when a Traoré counter took him past the last man, De Bruyne, before shooting at Ederson, their rocket burst of chances continued. This time a Cancelo dummy presaged a shot crashed onto the bar and, at last, Jesus entered. This was enforced by a De Bruyne injury but the question was whether it might actually prove a blessing.

A first answer was no, as the Brazilian failed to take aim when slid in by Foden. And when Gundogan sprayed wide from close-range Guardiola despaired. The emotion came close to deepening when Villa went close: Douglas Luiz crossed and a Traoré shot pin-balled off Zinchenko and John McGinn’s follow-up was beaten away by Ederson.

But, now came Silva’s strike and when Cash handballed, Gundogan made sure. – Guardian