League of Ireland clubs in the dark over FAI financial support 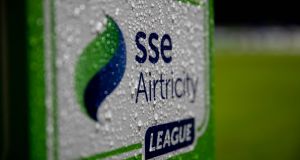 There is a widespread expectation among clubs that SSE Airtricity may return as sponsors for a further year. Photograph: Morgan Treacy/Inpho

Clubs and player representatives are seeking clarity from the FAI regarding financial supports and coronavirus protocols for the forthcoming league campaign with just a couple of weeks to go before pre-season training is due to get started.

With clubs having been advised to work on the assumption they will have no paying spectators this season, estimates of how much will be required to get the full programme of games completed vary but one chairman puts the target figure at up to €9 million and says the league could not be started until some sort of package has been agreed.

Even as they go through the league’s licensing procedure various clubs admit to still being completely uncertain with regard to key elements of their budget for the coming year and Stephen McGuinness of the PFAI suggests that some will have had to take “a complete stab in the dark,” when estimating income to the association.

As things stand, no sponsor has been announced for the coming season, which is due to start on March 19th, clubs have not been told whether they can expect any funds from broadcast or streaming rights, commercial revenues have been hit and there is no indication how much the FAI might secure from the Government.

“I think the FAI did a good job to get the league finished last year,” says Shamrock Rovers chairman, Jonathan Roche, “but they have to tell clubs what is on the table for this year, even it is poor, they have to finalise something over the next couple of weeks.”

Conor Hoey at Drogheda United suggests that the association needs to be targeting “between eight and nine million euro,” given the anticipated complete absence of gate receipts and related loss of commercial revenue. The two accounted for 70 per cent of the Premier Division’s €15 million in 2018 and the €9 million would account for most of that while also providing support to less severely affected First Division clubs.

“I think it’s clear that most of clubs’ revenue will be lost but most of their costs remain,” says Hoey. “Whatever the final figure, I think the FAI and government appreciate the position clubs are in and want to provide the support required to get the league played. There is no way, though, that clubs could go ahead without significant levels of support.”

Roy Barrett had suggested that the need for this year might well be greater than last year after the FAI’s AGM. It took around €2 million from the Government to get the 2020 season restarted last summer and that, he noted, had been to play half the season. In fact, club officials point out, it was closer to a third of the campaign.

Efforts to secure public backing for the new season are in fact believed to have been started some time ago and there is a widespread expectation among clubs that SSE Airtricity may return as sponsors for a further year but even as most clubs are in the latter stages of assembling their squads, there is no certainty around the numbers.

Roche believes that figures in the €6 million to €9 million are likely to prove overly optimistic. “People are talking about three times the €190,000 Premier Division clubs got last season but some of that was prize money and I really don’t think those clubs are going to get €600,000 each now plus the wage subsidy scheme.”

The latter, which every club bar Derry City is understood to have availed of last season, has covered a very high percentage of wages at some clubs but as things stand it is only due to run until the end of March, adding to an already uncertain situation.

“It’s only intended to go on until then at the moment but I think if the lockdowns continue, or there are ongoing restrictions, then that will be maintained which is important,” says Roche.

“But I do think this year is different too because clubs knew more about the situation. We would have made decisions for this season based on what’s happening with Covid and you can see that some other clubs are being cautious which is understandable. So I think there is a responsibility on the FAI to come up with something but I think the clubs have to be responsible too.”

First Division clubs received significantly less support than their Premier Division counterparts but most seem to have come through well enough. Cobh Ramblers chairman Bill O’Leary says that his club is in a “good position,” ahead of the season although he anticipates help “at least equivalent to what we got last year”.

McGuinness, meanwhile, whose organisation represents around 150 full-time players and as many again who are part-time, has written to Barrett and new FAI CEO seeking a meeting to discuss player representation within the league and association as well as other issues.

More immediately, he says, players at many clubs “want to know what’s in place in terms of (coronavirus) testing and protocols”. The hope, he says, is that all players might be tested once as they return to training and protocols kick in and the union is hoping that those involved in elite sport might be vaccinated soon after the roll out to priority groups has been completed.

“The players were happy with the way things were managed last season,” he says, “but with just a couple of weeks to go before preseason, they would like to know what is happening now.”

Schumacher name gives me motivation every day, says Mick 16:46
Andy Farrell doesn’t know yet if he’ll be with Lions or Ireland this summer 15:46
Gordon Elliott hearing to start at 9.30am on Friday 13:45
Weary England’s batting woes continue as India take control 13:33
First 2023 Rugby World Cup tickets to go on sale on March 15th 12:58