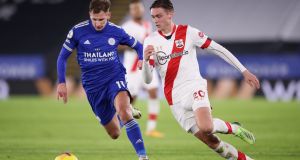 Will Smallbone of Southampton sustained the injury during the Premier League clash with Leicester City. Photo: Alex Pantling/Getty Images

Southampton manager Ralph Hasenhüttl has confirmed that Ireland under-21 international Will Smallbone is to miss the rest of the season after sustaining an anterior cruciate ligament injury in Saturday’s game against Leicester City.

The 2-0 defeat was the midfielder’s first Premier League appearance since he had come on for the last 35 minutes of the 5-2 defeat by Tottenham back in September.

Immediately after the game on Saturday, Hasenhüttl had praised his performance. “Will was good,” he said. “He was fighting and had a few good moments; we had a few chances in the first half also.

“I like him more in the 10 position than the six position. He had some good solutions, he also had some good chances on Saturday – one good chance to score. He’s a good footballer and learns to work against the ball also. It was a step forward in his development, definitely.”

But the Austrian already suspected that the knee injury that had had forced him out of the game after an hour might prove to be serious and on Monday afternoon, at his pre-match press conference for the FA Cup match against Shrewsbury, Hasenhüttl confirmed the bad news.

“We have after the last game another big injury with Will Smallbone. It is the worst for him. It’s an ACL injury so half a year out, maybe. It’s horrible for the young lad,” he said.

Despite his relative lack of game time, Smallbone, just 20-year-old, is very well regarded and might have been in contention for a senior international call-up had he managed a sustained run of fitness and appearances.

Instead, he joins Michael Obafemi on the Southampton injury list with the striker having missed out on a loan move to Swansea earlier in the month after sustaining a muscle strain in training.