Ireland midfielder has seen his opportunities dry up at Aston Villa 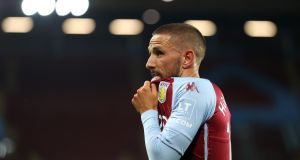 Conor Hourihane has gone on loan from Aston Villa to Swansea until the end of the season. Photograph: Julian Finney/Getty Images

Aston Villa midfielder Conor Hourihane has joined Swansea on loan for the rest of the season.

The 29-year-old Republic of Ireland international could make his Swans debut in Saturday’s FA Cup fourth round tie at home to fellow Championship club Nottingham Forest.

Hourihane has scored 29 goals in 150 appearances for Villa since joining from Barnsley in January 2017 but has been restricted to just four Premier League outings this campaign.

Villa head coach Dean Smith told his club’s website: “Conor is never happy when he’s not playing and we have respected his desire to go on loan to Swansea to play football games and to help them in their push for promotion.

“It’s a loan until the end of the season which gets him back in the heart of a promotion chase and playing regular football.”

Swansea currently sit second in the Championship following their 2-0 weekend win at Barnsley.

Hourihane, who has been capped 24 times by his country, launched his professional career with Plymouth following spells on the books of Sunderland and Ipswich.

His arrival at the Liberty Stadium boosts the midfield options of Swans head coach Steve Cooper after former loanees Kasey Palmer and Morgan Gibbs-White were recalled by Bristol City and Wolves respectively earlier this month.