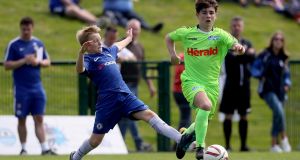 Kevin Zefi in action for DDSL against Chelsea in a Friendship Cup game in Abbotstown in May 2018. Photograph: Tommy Dickson/Inpho

Shamrock Rovers skipper Ronan Finn believes that if Kevin Zefi’s move to Inter Milan goes well then it might pave the way for more young Irish players to head for continental Europe rather than wait for to be allowed follow the traditional route of joining an English side.

Zefi, who made headlines a little over a year ago when he scored two goals for the Irish under-15s in a win over England, has progressed well since joining Rovers from St Kevin’s Boys and broke records while playing for the club’s first division team last season. He would normally have been expected to move at 16 to a Premier League academy.

With Brexit having, for the moment at least, closed off that avenue until a player turns 18, Zefi has settled on a move to Inter instead, although it is understood that he has family connections in the Italian city already. The club is also willing to relocate his parents, both of whom are Albanian born, when the transfer happens after his 16th birthday.

“It’s been strange with young Irish lads,” said Finn, who was speaking at the announcement that SSE Airtricity had renewed their sponsorship of the League of Ireland for two years with the new deal also taking in the women’s league.

“They’ve only ever tended to go to England, that’s always been the way where as maybe you talented lads on the continent, they’ll go to Belgium, they’ll go to Holland . . .

“So with Brexit being an issue, and there doesn’t seem to be any agreement on it, I think you will see this happening more and this could open a door.

“Irish lads traditionally don’t tend to travel to these places but if it goes well for Kevin, maybe more Italian clubs will go: ‘Hold on, there’s talent here and we have never tapped into this market’.

The success rate for players going to England has traditionally been terribly low, with the challenges of living away from home.

Zefi’s situation seems to be something of an exception because of his family background, the fact his parents will join him and those connections. But Stephen McGuinness of the PFAI is concerned that having to learn another language will be an additional barrier for other young Irish players if, as expected, moves like his become a more common occurrence for Irish teenagers.

“For many of the more talented lads, education has tended to take something of a backseat once they know they were going be going away and so you would worry about the lads being able to go away and cope with the language aspect of it,” said McGuinness.

Finn readily acknowledges that Zefi will have to overcome any number of challenges if he is to emerge at the other end of a notoriously tough system as a high-level player. But, he says, the 15-year-old certainly has the key of attributes required to embark on the journey.

“There’s a lot to it but Kevin’s got so many things going for him. I hope he stays injury free as you want him to keep progressing. Inter Milan are a huge, huge club and Kevin is a very talented boy. I wish him the best of luck as he’s a very good lad and a very good footballer.”