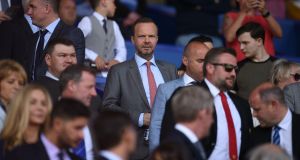 So that’s the team Liverpool are banking on to win them the title? There could have been little pleasure for Liverpool fans in watching Manchester United being gubbed by their Everton on Sunday, just a desperate hope that there will be a reaction, that the shame of such a limp performance will somehow inspire them against Manchester City on Wednesday. Perhaps it will, but you wouldn’t bank on it: almost the moment Ole Gunnar Solskjær got the job permanently, his players began acting like he was a supply teacher.

The 4-0 defeat to Everton was United’s fifth away defeat in a row – their worst run since 1981 – and their sixth in their last eight games. They didn’t play especially well in the other two either. The Norwegian papers may still proudly show United third in the Solskjærtabellen – the league table as it would be had the season begun when their man replaced José Mourinho – but the sunshine doesn’t seem anywhere near as bright as it did.

That the problems at United run far deeper than Solskjær is obvious. United were going nowhere under Mourinho and under him toxicity was seeping through the club: removing him was absolutely a reasonable decision, to try to salvage something from the season – a top-four finish, a run in the FA Cup or Champions League. United did improve in those first weeks under Solskjær, during which he exhibited far more tactical virtuosity than he had at Cardiff. Appointing Solskjær on a temporary basis, a smiling club legend to soothe tempers and buy some time, was probably the best decision the United board has made since Alex Ferguson retired.

All of which was ruined when he was given the job on a permanent basis at the end of last month, a decision that exposed the lack of football expertise among directors, their tendency to drift on the tide of public opinion rather than plotting their own course. It became apparent very early in his tenure that David Moyes was out of his depth at United, but his appointment was hard to resist once Ferguson had nominated him as his successor. Bringing in Louis van Gaal would only have made sense if it had been part of a general pivot to run the club along more Dutch lines and he had been the trailblazer for a younger coach with similar principles.

But of course it was not, for this is a board that seems to have little concept of football as a sport that may require long-term planning, to see little value in infrastructure or philosophies or building foundations. Instead he was replaced by Mourinho, who may have served under him at Barcelona two decades earlier, but who had rebelled to practise a very different style.

Mourinho did fit a general pattern, though, which was United going for big names who were at or already beyond the summit, rather than having the expertise to identify rising talent – a failure that in part explains why, for all their noodle and mattress partners, they were the only member of the Premier League’s top six to fail to make a profit last season. Giving what it has done to their wage structure, the signing of Alexis Sánchez may turn out to be the most costly in the club’s history.

The timing of Solskjær’s appointment on a permanent basis, similarly, suggests a reactive board, responding to circumstance, directors seduced by a new manager bounce rather than waiting to see if there was much substance beyond that. Solskjær himself blamed his players’ lack of fitness – they ran 8km less than Everton on Sunday – which makes a certain sense: United’s running stats have been poor all season; perhaps his players were able to raise themselves early in his reign but have been unable to sustain it.

But there are also deeper issues of attitude and personnel. Paul Pogba and Anthony Martial have faded badly. Chris Smalling and Phil Jones have come to seem like the statues of lions outside the British Museum: patched up and vaguely impressive in their longevity but not really there for defence. Last week’s trip to Spain seems to have had the unfortunate effect of turning David de Gea into the David de Gea who plays for Spain. Fred, with good reason, looks bewildered by the chaos that surrounds him.

Other than Marcus Rashford, although even he has been misfiring recently, is there a single player United fans would really be disappointed to lose? Perhaps that is some defence for Mourinho, although it would be easier to be sympathetic if he hadn’t been responsible for at least some of the signings and if he hadn’t ostracised much of the talent he did have; just because a hand is bad doesn’t mean it’s impossible to play it badly.

The overhaul required is enormous. It may be that there is no manager in the world game with experience of effecting such a revolution. Can Solskjær do it? Maybe, but the question that pulses most obviously now is this: if United had not given him the job permanently a month ago, would Ed Woodward still have appointed him at the end of the season? Would fans want him too?

The only bright spot for United is that their side’s current ineptitude may at least stop Liverpool winning the title. - Guardian