Aaron Greene embracing the buzz as Rovers prepare for Bohs 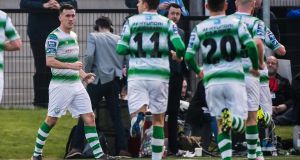 After the endless mentions of the “difficult child,” Aaron Greene sees the latest Dublin derby as having the potential to provide a distraction from the problem parent. Tuesday’s game between Shamrock Rovers and Bohemians at Tallaght is, he believes, an opportunity to focus on football at a time when the FAI’s finances and governance have been hogging the headlines.

“The timing is good,” says the Rovers striker ahead of the game. “With all the talk about the FAI at the moment, people can come out and forget about all of that; look at the football and see the quality that the league has to offer. These games are always big but this is up with the biggest I’ve known and both teams are playing really well at the moment, it should be a great occasion.”

The interest is certainly there, suggests the Dubliner who sought to take a little time out in the wake of scoring his side’s winner at the Brandywell on Friday night. “I was down in Wexford at the weekend looking to chill out and people were all talking about the game; there were a few northsiders around, a few from Tallaght and you realise what a big thing it is to everyone.

“There a real buzz about it; I’m from Tallaght myself and my son plays for this club so I certainly get that. I’ve played in a few of these games, I remember one where Rovers and Bohs were both going for the league and I think Michael O’Neill said to the Rovers fans not to come because Bohs were in money trouble at the time.

“I was there for that, I was at the pig head throwing one. I’ve had a few eventful ones but I was very young back then (during a previous stint with Rovers and one at their cross city rivals) and you sort off take it all in your stride but now I’m 29 and you realise just what a big thing the games are.”

There is plenty of context to set the scene for this one. Bohemians inflicted the league leaders’ only defeat of the season at Dalymount back in February when Greene was controversially sent off and a Dinny Corcoran spot kick ended up settling the matter.

When Stephen Bradley’s side drew with Dundalk four days later, there seemed to be a serious question mark hanging over their hopes for the new season but they come into this game having won all eight league games since.

A ninth would have them approaching their all time record of 12 straight league wins and put an awful lot of daylight between them and their fiercest Dublin rivals who even Greene concedes have done very well so far in this campaign.

“It might not be what people expect from a Rovers player but they don’t get the credit they deserve,” he says. “Look at the group they have and the way they have come back after the players that they lost last year. Look at the performances against Dundalk; okay, people will say that Dundalk won but I think they were unlucky and that’s after making six or seven changes.

“They are a good team, a really good group, all the more reason for us to want to beat them in front of our own fans in Tallaght.”

They look to do with much the same group available to Bradley. Greg Bolger remains a doubt while Sam Bone and Ethan Boyle are still out.