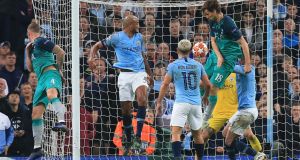 Pep Guardiola rued the cruelty of the VAR as Spurs ended Manchester City’s hopes of an unprecedented quadruple by eliminating them from the Champions League. The City manager was left to ponder what might have been after Fernando Llorente’s second-half goal was allowed to stand after a review while Raheem Sterling’s injury-time effort for the home side was ruled out.

While a buoyant Mauricio Pochettino said Spurs have the belief and class to become champions of Europe for the first time after knocking City out 4-4 on away goals, the substitute Llorente’s ultimately crucial goal went in via an elbow and hip, with the referee, Cuneyt Cakir, awarding the goal and VAR upholding his decision.

“I support VAR but maybe from one angle Fernando Llorente’s goal is handball, maybe from the referee’s angle it is not,” Guardiola said.

City won the second leg 4-3 but thought they had sealed a place in the semi-finals for only the second time when Sterling seemed to have completed a hat-trick in injury time.

The decision was overturned, with Sergio Agüero ruled offside before he picked out Sterling. “I am for fair football, for fair decisions,” the City manager said. “The referees must be helped sometimes. When it is offside, it is offside. What can I say?”

Guardiola, who has long played down talk of winning all four trophies, reached at least the Champions League semi-final in each of his seven seasons in charge of Barcelona and Bayern Munich but he has been eliminated in the last 16 and twice in the quarter-finals in his time as City manager.

“It was an incredible illusion for us to get to the semi-finals because this club only was there once,” he added. “It was an amazing night for us. Football is like this. It is unpredictable.”

Aymeric Laporte was at fault for Son Heung-min’s two goals and Guardiola rued the defensive errors. “We make mistakes in that competition but were punished a lot,” he said. “We scored the goals that we needed. Unfortunately at the end it was a bad end for us.”

City mustered 20 shots and Sterling equalled his career-best tally of 23 goals in a season, Bernardo Silva added the third and Agüero reached 30 goals in a campaign for the fifth time in England.

“Second half we did everything,” Guardiola said. “We created an incredible amount of chances today against a tough team. We reacted incredibly well. I am so proud, especially for the fans.”

Pochettino said that he was not ready to review the two controversial decisions that took Spurs into the last four of the European Cup for the first time in 57 years. “Give me half an hour more and, on the plane, I can watch,” he said. “It was unbelievable, the way it finished. I am so happy, so proud.”

He paid a tribute to his depleted group of players, with Llorente brought on after Moussa Sissoko went off with a suspected groin problem, as Spurs had no senior midfielders on the bench. “I think they are heroes,” the manager added. “They deserve a lot of praise. To be in the semi-final was a dream before and now we are there.”

Son, who also scored last week’s winner against City, is suspended for the first leg of the semi-final against Ajax after getting another booking . “He was unbelievable,” said Pochettino, who is waiting to discover the severity of Sissoko’s injury.

Pochettino is confident his team can upset the odds again by winning the Champions League.

“We showed [here] and last week that all is possible in football,” he added. “That is the most important thing. Sport always gives you the possibility to beat teams that no one thinks we are capable of [beating].

“Football is not only about talent but belief. This team has the personality and mentality to believe all is possible. That is a massive achievement for us. With this belief, we can achieve big things.”

Christian Eriksen, who gave the ball away in the move that led to Sterling’s disallowed goal in injury time, said: “I think I must be one of the luckiest guys on the planet today. With the last one they scored, I thought it was over. Thank God the ref gave offside. The whole game was a rollercoaster, it was goals, goals, goals, goals and drama everywhere.” – Guardian