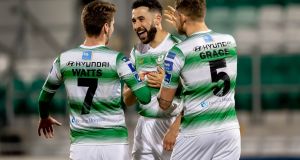 Another good night for the league leaders who won easily here to move 13 points clear of the team in fourth place. No offence intended to Bohemians or Derry City in second or third but it is the gap they have opened on champions Dundalk , it seems safe to assume, that will be doing most to get them dreaming of the title around Tallaght.

The Dubliners have, of course, played a couple more games than any of their rivals but claims that the table was telling little white lies because they racked up handy wins has taken a bit of a battering of late. Okay, this was actually as handy as they come but Waterford would have been regarded as one of the more challenging opponents.

As it turned out, they rolled over rather easily. Seán Kavanagh and Roberto Lopes got the home side’s goals but it was barely a contest with the visitors pushing the ball about the place well enough for short spells early then largely losing whatever small grip they seemed to have on things. They did grab a goal back with virtually the last kick of the game through Aaron Drinan but the points had effectively been decided long before then.

Rovers, to be fair, came into the game off the back of their best result of the campaign to date, a 3-1 victory in Cork, and the confidence their recent form has given the group was clear as they dominated opponents who looked technically decent but generally incapable of posing a serious threat.

Early on, the two sides swapped wild shots that flew well over but Stephen Bradley’s side had a near monopoly on the ones that looked as though they might actually go in.

The width and pace they possessed down the left flank, where Trevor Clarke and Kavanagh combined well to get at right back Rory Feely, was consistently an issue for Waterford and after Kavanagh had coolly converted a Clarke cross for the opening goal, either Clarke or Aaron Greene might easily have made it two before the break.

Waterford started with what looked decidedly like a four-man front line but still seemed to have no actual striker; certainly none that was making his presence felt. Out of possession, they all largely left the Rovers back four to their own devices, after which they were routinely bypassed. In it, they looked too lightweight really to trouble a defence that looks far happier in its collective skin this season than last.

Bradley’s midfield dominated things and though Jack Byrne didn’t quite light the night up the way he did on a couple of occasions last month, he always looked like he had a ball in him that would completely undo the Waterford defence. And 68 minutes in, he produced it, a corner to which Lopes had only to apply a glancing header in order to score.

By then, Matthew Connor had done well to keep a close-range Ronan Finn effort out and the second goal has felt entirely inevitable. After it, Alan Reynolds finally moved to substantially shake things up and Ismahil Akinade’s introduction, greeted with the usual chorus of abuse from the supporters of Waterford’s opponents, did add a little bit edge to the attacking side of the game. The problem was that the game already looked lost.

The former Bohemians striker stuck to his task though and it was his cross that led to Drinan’s goal in the third minute of added time.