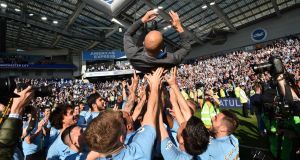 Manchester City manager Pep Guardiola is thrown into the air by his players as they celebrate after their 4-1 victory against Brighton to become Premier League champions for a second consecutive year. Photograph: Glyn Kirk/AFP

How do Manchester City follow the near-perfection of a Premier League title triumph of 98 points? Try, somehow, to repeat it next season.

Simple to say, far harder to pull off. Yet this is the challenge for the magnificent champions and their equally impressive manager Pep Guardiola.

After Brighton were beaten 4-1 on Sunday to make City the first team for a decade to claim consecutive crowns, Guardiola repeated his declaration that is he is sure they will be even better next season.

The feat can be billed as the domestic game’s Everest. For next season’s tilt at conquering it Guardiola and his players can draw succour from having already met the challenge of retaining the title. This came after City accumulated a record 100 points in 2017-18 to register a mind-boggling average, across the two seasons, of 99.

To be able to repeat it once more Guardiola has to ensure his team are mentally teak-tough, as focused as they were this season. And on the basis of always looking to improve the squad from a position of strength he will, primarily, assess the defensive midfield and centre-back positions.

Fernandinho has just returned his best campaign, a 10-out-of-10 performance, but he is 34. Atlético Madrid’s Rodri is thought to be on Guardiola’s radar as competition for the Brazilian’s holding role and to be his eventual successor, the 22-year-old having a release clause of about €69 million. Atlético may wish to take Nicolás Otamendi from City and, with Guardiola considering allowing the 31-year-old to leave, this would aid any deal.

Along with Otamendi there are doubts regarding the future of another central defender, Vincent Kompany. Now 33, the captain wants more regular football and may depart despite City willing to offer him a one-year contract.

Guardiola may look internally to replace Otamendi or Kompany (or both), as he is an admirer of Eric García, who joined from Barcelona in summer 2017, the Spaniard being a product of the La Masia academy. The 18-year-old made his debut in December in the 1-1 Carabao Cup draw with Leicester before two further appearances in the competition.

One department Guardiola is unlikely to strengthen is left-back, despite Benjamin Mendy again having his campaign severely disrupted by injury, managing only 10 league starts. He also missed virtually all of last season, owing to a serious knee problem, so to be able to win two championships with a makeshift in the position illustrates Guardiola’s managerial acumen.

The combination of Oleksandr Zinchenko’s emergence as a viable alternative and the difficulty of recouping the 22-year-old’s €57 million fee means Guardiola is likely to retain the pair as his main options for the position.

He will also have to consider the threat of a transfer ban from Fifa which would likely reach across two windows. While the governing body is thought to be investigating a potential breach of rules regarding signing young players, City may decide to make extra signings in anticipation of an embargo.

Ilkay Gündogan is yet to agree a contract and the club’s stance has been not to allow any player to enter the final year of his terms. This could force Gündogan’s sale but with the 18-year-old Phil Foden handed two starts in crucial matches of the title run-in – scoring the winner against Tottenham – and Kevin De Bruyne hoping to be available for all of next season after being absent for large swathes of this one, Guardiola may decide central midfield is adequately resourced.

Regarding the need to be as psychologically hard, De Bruyne offered a hint of the squad’s desire. He had already suffered two knee injuries when he hurt a hamstring during the win against Spurs. It appeared to have ended his season but he returned for the last 12 minutes of the victory at Brighton.

He said: “When I had the injury the first thing I told the physios was: ‘Leave me alone, I want to go on holiday, I’m done.’ [But] I switched after a week and wanted to be ready to be help the team if necessary and even in the [FA Cup] final.”

Sergio Agüero, who equalised against Brighton, confirmed the sense of Guardiola’s side having a special bond. “We’ve achieved this together – the players, the coaches, the staff, the board, and our amazing supporters,” the striker tweeted. “Thank you all and we’re aiming for more.”

Agüero’s last words echo the manager’s mantra and that of team-mates. First up in the quest for further glory is Saturday’s FA Cup final against Watford at Wembley as City look to compete a historic domestic treble.

Then, after holidays, the work will begin once more on the main prize: the retention, yet again, of the title. – Guardian